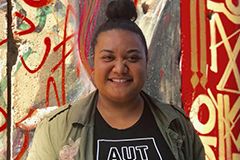 Culture is a big part of her identity, says Matilda Poasa who completed a Bachelor of Māori Development in Māori Media in 2017.

“It’s really important that Māori and Pacific voices are heard and our faces seen. I’d always wanted to work in the film industry, so the Māori Media major was an obvious fit because it allowed me to study film, television and the media, but with a cultural lens. Even though I’m Samoan rather than Māori, it was such a rewarding experience.”

She loved that she wasn’t just learning about movies in her degree, Matilda says.

“We were picking up cameras and making our own films, going into the studio to record and edit. That kind of learning really appealed to me, and the friends I made are friends for life. The biggest highlight of my time at AUT however was graduation. That was the culmination of years of not only my own personal sacrifice but that of my family, friends and those who taught me. My success is definitely not mine alone.”

Championing indigenous artists
Her time at AUT also opened the door to an internship at the Sundance Institute in LA.

“I was about to graduate and the AUT Internz International Scholarship Programme was offering this amazing opportunity to not only work for the Sundance Institute but to do that in Los Angeles of all places. I didn’t have anything to lose, so I applied. That was the best experience for me.“

She loved working for an organisation that advocates for native and indigenous artists, Matilda says.

“I loved that the Sundance Institute is dedicated to discovering and developing independent artists. What I enjoyed most about working there was that we championed the voices and stories of native and indigenous artists. It’s honestly been the most amazing work experience!”

The next step
Now back in New Zealand, Matilda enjoys being able to continue supporting indigenous creatives through her role as a projects and relationships co-ordinator for the Māoriland Film Festival/Māoriland Charitable Trust.

“When I got back from Sundance, my former lecturer, Dr Ella Henry, invited me to go as the AUT representative to the film symposium in Auckland. At the symposium, I saw Libby Hakaraia who is the director of Māoriland. I had hosted her at the Sundance Film Festival when I was in LA, and when she saw me in Auckland she offered me a job on the spot.

“My role has me co-ordinating and creating materials for all the different projects and initiatives Māoriland has going on, which is pretty neat. At the Māoriland Film Festival in March this year, I also took on the role of guest services co-ordinator and had to host over 120 international and national filmmakers, and creatives! It was crazy but luckily Sundance prepped me for it all.”

She loves that her new role also enables her to keep in touch with her Sundance workmates.

“I'm off to Toronto at the end of October for the ImagineNATIVE Film Festival, and I'll most likely see some of my old Sundance colleagues there. It’s cool that I still get to follow on from Sundance, and that my work still aligns with my passion for ensuring indigenous voices are being heard. And all thanks to my studies at AUT.”