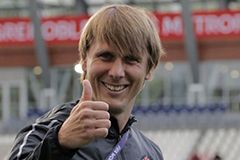 What he loves most about his job is contributing to the success of a team, says sport and recreation alumnus Dr Cesar Meylan who is now the head of physical performance for Canada Soccer, based in Vancouver.

“I’m currently preparing our men’s national team to compete in the FIFA World Cup qualification in June and in autumn, as well as preparing the women’s national team for the Olympics in Tokyo later this year. To me, reaching a high level of excellence and creating memorable relationships is what I love most about working in this industry.”

Having joined Canada Soccer in 2012, Cesar has had a number of memorable moments throughout his career.

“The proudest moments in my career so far were seeing our women’s team step onto the podium during the Olympics in 2012 and 2016, as well as the men’s team winning its first round of World Cup qualification. To see players reach their dream, and looking around and feeling a deep connection with the staff around me is what has made me the most proud in my career.”

A progressive university environment
Human performance is a field that has always fascinated him, says Cesar who grew up in Switzerland and completed master’s degrees at the University of Lausanne, Switzerland and Edith Cowan University in Australia before coming to AUT for his PhD.

“I grew up playing sport every day, in particular football, and was always amazed by the performances of athletes, whether it was a World Cup or the Olympics. When I realised that I wasn’t going to make it into the sporting elite myself, I focused my attention on understanding how to help others achieve their dreams and compete at the highest level. To have the knowledge, character and experience to support champions is what has driven me into this field and continues to motivate me.”

The integration of research and high performance sport is one of the things that impressed Cesar most about his time at AUT.

“I came to AUT in 2009 and noticed that AUT was very progressive in the way it approached the integration of research into high performance sport. The Millennium Institute was just being upgraded and I was excited to be part of such a great movement.

“For nearly four years, I lived and breathed strength and conditioning every day, and it was such a good place to be and grow. I haven’t come across such a rich environment since. The calibre of the people going into the building was amazing. I was excited to go and work there every day, and I formed friendships that will last a lifetime.”

Making a difference to youth athletes
For his doctoral research, Cesar focused on better understanding strength and power development during growth.

“I’ve always loved working with youth because they’re the future, they’re enthusiastic, and they make me happy and laugh. I wanted to be able to contribute to this field of research, so that we can globally provide better support for young athletes, and enhance their experience in sport and their chances to succeed.

“My PhD research provided tools for coaches to approach youth training with more evidence-based practice. It has contributed to a growing movement that hopefully will see more athletes succeed, enjoy sport and stay healthy.”

Cesar’s research was supervised by Professor John Cronin from AUT’s School of Sport and Recreation, with Dr Jon Oliver and Mike Hughes from Cardiff Metropolitan University in Wales as his secondary supervisors.