A unique research project currently underway at AUT is shedding light on the impact of loneliness among people battling ongoing ill-health.

The study, which is being conducted among the 18 – 65 age group, has been made possible thanks to a generous bequest from the late Jeanette Crossley, a highly regarded academic who suffered from Addison’s disease and other related autoimmune conditions.

Conducted by AUT academic Dr Wendy Wrapson, the study aims to build awareness of the challenges people with complex medical conditions face when trying to maintain their social connections and networks. Little research has been conducted into the area so far and Dr Wrapson hopes her efforts will not only increase understanding, but also aid in the development of interventions and support initiatives for those in need.

“People with long-term health conditions are particularly vulnerable to loneliness and social isolation. That’s because health conditions can limit people’s independence so they are less able to seek out social interactions and may find it difficult to develop or retain their social networks,” Dr Wrapson says.

“Preliminary analysis of our data shows that people with complex medical conditions often feel disconnected from their peers because they cannot always engage in the full range of activities their friends do. Sometimes they may not get invited to events because their friends think their health will prevent them from participating fully. These findings show how one could easily become lonely and socially isolated because gradually people can find themselves ‘on the outside’ of their social network.”

Loneliness and social isolation are known to have a negative effect on both physical and mental health and is far more widespread than once thought.

“Older adults were at one time considered to be the most vulnerable group, but we now know that it can affect people of all ages and backgrounds. Loneliness has been described as a public health issue because so many people are affected, and the health implications can be far-reaching.”

The research project – which includes a qualitative study of 30 individuals and a quantitative study of 200 – concluded late in 2019, with a one-day workshop to report findings and investigate solutions.

“As a person with very complex medical conditions she suffered very much from loneliness. As her life was very restricted she became less able to socialise until she was basically bedridden. However, she still had an incredible mind, and researched issues around loneliness and became very aware intellectually of all aspects of the condition.

“She knew many people with complex health issues and I'm sure learned how prevalent loneliness was among such people. If she had lived, Jeanette  intended setting up a website, marshalling all her skills to bring information about loneliness to a wider audience.”

“I’m sure Jeanette would be delighted,” Allison says.  “She would have wanted the research to have practical outcomes and benefits for those in a similar position to her. I think she probably saw this as a way for her name to live on after her.” 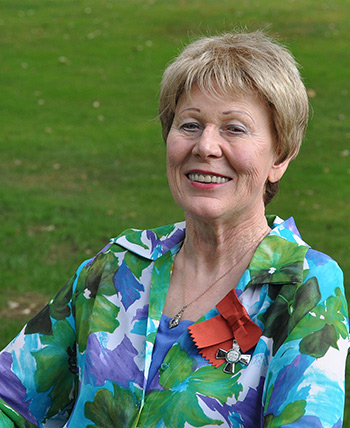 Dr Jeanette Crossley at an investiture ceremony at Government House in April 2009. Jeannette was awarded the Insignia of a Member of the New Zealand Order of Merit for Services to science, in particular Addison’s Disease.