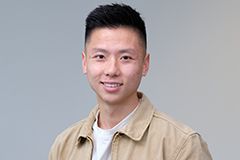 The decision to study at AUT opened up his life here in New Zealand, says Alvin Cheung who came to AUT as an international student from Hong Kong.

“As an international student who came to New Zealand halfway through Year 10, I didn’t particularly enjoy my first experiences here in Aotearoa. However, when I decided to study at AUT and live in the AUT Akoranga Student Village, I could fully immerse myself in the culture of AUT.

“I initially began with my sport and recreation degree as I have a real passion for sports, and then picked up a Bachelor of Business to advance my understanding of the business model of sports, and challenge my personal and professional development. The workplace experience that is part of the AUT degrees really stood out me for me, and I was very happy with my decision to study at AUT.”

While there were many highlights throughout his studies, being selected as an AUT student ambassador in his last year at AUT was a standout for Alvin.

“This experience uplifted me and took a lot of pressure off my shoulders. Being able to positively influence and assist new students was incredibly rewarding, and I still miss the fun our ambassador team had at Orientation and AUT LIVE, AUT’s open day.”

Removing barriers for minority communities
After graduating in 2017, Alvin now splits his time between his roles as a community development officer at the Northern Football Federation and as an ActivAsian volunteer coordinator at Harbour Sport.

“I’m responsible for identifying, understanding and supporting individuals and groups from minority communities in the North Harbour and Waitakere region. My roles aim to encourage participation in sport, especially football, by minimising entry barriers, making information more accessible and providing equal opportunities for people of all backgrounds.

“As someone who was born overseas, I understand the difficulties migrants can have when integrating into New Zealand. Sport should be a platform where people can come together and enjoy without barriers and judgement, and I’m advocating for that. There’s no better feeling than seeing people benefit from your support and work.”

One of the achievements Alvin is most proud of is developing two coaching and refereeing courses that were delivered in Mandarin.

“The courses aim to remove entry barriers and create another pathway to participation for Chinese speaking individuals and groups. These courses are the first in football in New Zealand, and we were able to upskill 23 coaches and 13 referees who had little to no background in coaching and refereeing.”

Well-deserved recognition
Alvin’s efforts to make a difference to minority communities haven’t gone unnoticed, and the Asia New Zealand Foundation Te Whītau Tūhono has named him one of its 25 young people to watch.

“I’m still very overwhelmed and extremely humbled by the recognition from the Asia New Zealand Foundation. I’m privileged to be listed among these young and aspirational leaders who are working tirelessly for better relations between New Zealand and Asia.”

Through his work with the Asian community, he was encouraged to submit a nomination, Alvin says.

“I was thrilled to learn that I would be going to Parliament to attend the ceremony as one of the twenty five awardees. It was an incredible experience and I’m thankful for the support everyone has shown me that led me to where I am today. It has been an awesome journey thus far and I can’t wait for the next chapters.”