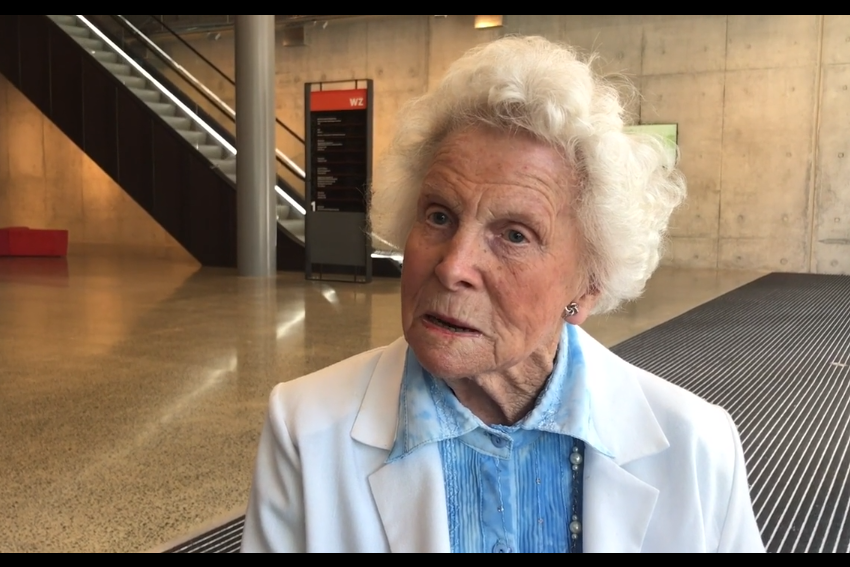 Val Petrie, an 87-year-old alumna of AUT's early predecessor, Seddon Memorial Technical College, donates regularly to one of the funds managed by the AUT Foundation. She visited AUT to meet a recipient of the scholarship she donates to, and explained a little more about her life and why she continues to give back.

Val, from Blockhouse Bay, is one of nearly 100 people who donate regularly to one of the funds managed by the AUT Foundation, doing so because she valued her own education and wants to 'put something back into the system'.

Although Val didn't see her story as particularly special, the team at the AUT Foundation got curious about the lady with lovely handwriting who regularly sends $20 contributions to one of our scholarship funds.

"It's just me being me," Val told us. "I'm nothing special. But I've had the right people around me to encourage me.

"My giving has been very modest but I just feel that I would just like to put something back into the system so somebody can perhaps get something out of it." Val has had a good life, she told us, and attributes many of the opportunities that have come her way to the quality of the education she received between 1944 and 1946 at AUT's early predecessor. Among her lessons while there, Val learnt pitman shorthand – a skill to which she attributes a great deal of her career success.

She had some inspiring teachers who encouraged her, and recalls developing a fascination for the language of shorthand.  Val remembers she went through a phase of dreaming in shorthand, and once, writing in her diary while on an airplane, fascinating another passenger: "I think she thought I was Egyptian!"

"I just loved it and when you find something that suits you it's a good idea to go with it isn't it really?  It was something I found suited me."

Val passed her public service exams, left college and found her skills in demand in the job market, securing her first job at Housing Construction Department in 1948. But she returned occasionally to Seddon do further study at night school with a friend.

Val admits she could have gone further with her education but, at the time, she had other priorities. "I didn't feel like putting my fingers to the grindstone because my social life was improving."

Never having any problems finding employment, Val told us "I had some really good jobs." She went on to work as an assistant secretary to the head of Forest Products. After doing the 'motherly thing' and staying home with her two boys for eight years, she found ready employment in the education system in administration and support roles.

Her highly prized recording and documenting skills have provided her with countless secretary roles for volunteer organisations.  "They always see me coming!" she says. "It's a two-way thing because it's good for me – and that's what's kept the world turning."

Val's donations are not the only connection for her: her grandson graduated from AUT with a Bachelor of Laws two years ago.

This fund provides scholarships to masters and honours students who show academic and community achievement.