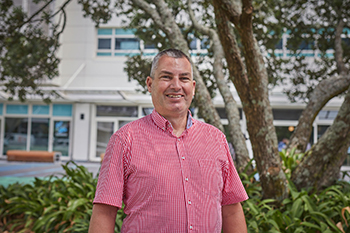 How can we make the world a better place?

That’s the question driving Ben Wooliscroft, the first Professor of Macromarketing at AUT and in the world. In answering such a lofty enquiry, Professor Wooliscroft uses a holistic, multidisciplinary approach that is founded on what he calls “a playful approach to research”.

“Research needs to be driven by its questions. We need researchers who are question driven, phenomena driven, who are playful in the way they research – who are open to looking around and being inspired by new things and new approaches,” says Professor Wooliscroft, who is also President of the Macromarketing Society Inc., an international society based out of the USA.

What, exactly, is macromarketing? The Wellington-born, South-Island-raised academic defines it as studying the “interactions between markets, marketing and society”. In other words, how we can do things better for the benefit of all. Professor Wooliscroft says his research interests span brand conceptualisation and barriers to effective and equitable mobility (“Auckland is broken,” he declares) to ethical consumption, the gig economy and the history of begging in the United States city of Denver, Colorado.

“My research is quite diverse but it’s always about how to improve the quality of life of our citizens and our distant citizens. The research we, social scientists, do is incredibly difficult because it must transfer to the real world. We encounter so many interactions, feedback loops – easy answers are not available.”

Macromarketing has long existed as an approach to research, both qualitative and quantitative, and it is rising to prominence as the world faces challenges related to climate change, inequality and market failures. Early macromarketers worked in ghettos in North American cities and in communities of developing countries to determine what kind of environment is needed for markets to benefit society. While that work was and remains important, Professor Wooliscroft says the “increasingly stressed” times that we now live in make macromarketing research even more valuable.

“It’s deeply concerning that the major dialogue around climate change is to find solutions that are technocratic, to figure out which technology we can swap out, and to identify what we can sell people things to fix things – rather than how we can behave and move differently. The assumption is each of us will move through life with 1.5 tonnes of steel around us. Whether that’s battery or petrol powered doesn’t really matter. We need to move in a more efficient, more natural way.”

Professor Wooliscroft says his new title symbolises that he has “simultaneously reached the finish line and the start line” of his career. He takes seriously – but not unplayfully – his responsibility as an academic leader.

“With a professorial appointment comes a requirement to be more inquiring, to try different things, be more playful and to help others to be more playful, to slow down, to think about what is important, how to have an impact. Can we change public policy, business behaviour, society? These are the ultimate questions that need to be answered.”