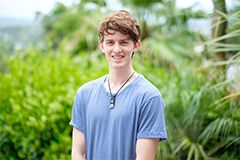 He was drawn to Asian culture from a young age, says AUT Bachelor of Arts alumnus Taylor Marston.

“I had always dreamt of working in Asia, and started to teach myself Japanese and Chinese when I was in secondary school. However, I found myself more attached to the Japanese language, so I decided to enrol in the Bachelor of Arts in Japanese Language at AUT.”

“AUT’s course is more hands-on and practical, as opposed to theory-based. I also loved being able to get involved in so many things by doing my degree – I taught as a student mentor at an Auckland high school, I was leader of the Japanese club at AUT, and I was the MC for several events over the course of my degree.”

Highlights of AUT life
There were many highlights throughout Taylor’s study, including a one-year exchange to Japan, which provided him with an incredible learning and cultural experience.

“The exchange to Sapporo was a life-changing experience for me, and wouldn’t have been possible without the international exchange programme at AUT.”

“For my workplace experience, I worked for a company over a period of four months. I gained a range of experience in business management, economics, and business strategies – skills that are completely new to my area of study.”

Ongoing success
Taylor was twice awarded the Prime Minister’s Scholarship for Asia and also received a study grant from the Asia New Zealand Foundation to support his time on student exchange. He came second in the JSANZ national university level Japanese speech contest, and won the international prize from Technos College in Tokyo.

He says his success is down to simple perseverance, and he has now moved on to postgraduate study as well as more time in Japan.

“I’m currently completing a master’s degree in political studies at Kobe University in the Graduate School of International Co-operation Studies. I’m in my third semester and am finishing up the last of my papers before writing my thesis. I’ll be soon sending out a survey to 44 local governments in Japan engaged in sister city relationships with New Zealand, followed by interviews with public officials of several of those local governments.

“I’ve had the pleasure of visiting the CLAIR (Council of Local Authorities for International Relations) headquarters in Tokyo and discussing my research intentions with them. CLAIR have since agreed to support my research, which will be very useful when it comes to conducting interviews with mayors and other local government officials. I also visited the New Zealand embassy, and discussed my research with one of the executive officers there.”

He is also proud of receiving the Rotary Yoneyama Memorial Foundation Scholarship and becoming involved in the Rotary club, Taylor says.