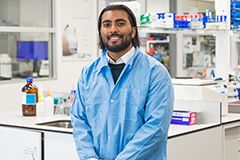 Medical laboratory science makes up 70% of a patient's diagnosis, says Sahil Mani who is currently in the final year of his degree.

“I always thought that physicians knew what disease is manifesting in a patient just by looking at them, but this isn't always the case. Without us medical laboratory scientists, physicians are often baffled as to what disease a patient has.

“The sense of satisfaction you get when you realise how much of an impact you're making on a patient’s life is one of my favourite outcomes of the Bachelor of Medical Laboratory Science. You develop a special connection to the patient even though you never see them, and that is the motivation that every good scientist has.”

The right fit
Originally from Fiji, Sahil came to New Zealand in 2001 and attended school in Auckland. It’s where he first discovered his passion for science.

“When I was at Papakura High School, I achieved 1st in Chemistry and Physics at both NCEA Level 2 and 3. I had a taste for science and wanted to delve deeper into it at university.”

He initially planned to study pharmacy, but this plan soon changed.

“I was very interested in chemistry, and wanted to know about how a drug affects the body and why. I didn't get accepted into a pharmacy degree but I also realised that it wasn’t quite the right fit for me. When I saw AUT’s Bachelor of Medical Laboratory Science, I just knew this was something I wanted to do. This degree focused on pharmacokinetics and pharmacodynamics in the second and third year, which was what I was looking for in the first place.

“As each year went by there were new things I was exposed to, which would only fuel my curiosity. I got so much out of this degree. I’ve learned how red blood cells and white blood cells are made, and about cancers that can result due to an overproduction of certain white blood cells. I’ve also learned much more about the body, how it can defend me, protect me and what would happen if these defences were broken. I developed a genuine appreciation of the human body over the course of this degree and how hard your body is working to ensure you’re free from illness."

“I’m so glad I chose this degree, and have enjoyed all my lectures, even the ones at 8am (as long as I had a coffee). Thanks to AUT’s connections, I also landed a job with LabPlus last year as part of their casual student programme. This also helped me to get a final-year placement for clinical chemistry and immunology.”

He has appreciated the support offered by the academic staff.

“When my father passed away from cardiac arrest last year, I was devastated as I’d lost somebody close to me but I was also stressed as I had a theory test two days after it happened. I’m quite stubborn so I attended the theory test despite my lecturers and friends advising me to take it easy, and ended up getting an A- for that test. I owe it to them for supporting me.

“To add to the stress, practical exams and final exams were only a few weeks away but I kept pushing and eventually suffered from a viral infection. I was afraid and emailed the student advisor at the time, Holly Perry, and she told me to listen to my body and take a rest. It was at that moment where I didn’t feel like a student, I felt like part of AUT. Thanks to the support from my dearest friends and lecturers I walked away with A grades.”