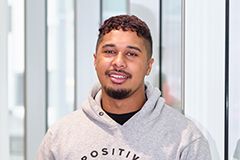 He would love to pursue a career in film, says Peter Leaupepe who is currently studying a Bachelor of Communication Studies.

“I love to create and analyse films, as I want to share positive stories with the world. I’m now in the second year of my degree and I’m hoping to pursue a major in TV and screen production.

“Studying communications was ideal for me because the degree covered some of my hobbies and interests, including film production, a bit of drama and creating footage,” says Peter who is also an actor and will appear in the upcoming feature film Brown Boys.

More than the theory
What he has enjoyed most about his studies is the practicality of the papers.

“I would highly recommend the Bachelor of Communication Studies if you’re interested in the media industry. We don’t just study theory-based papers; as part of this degree we also get to create our very own short films, and radio and audio logs. That’s a lot of fun.

“Getting an A for my documentary video for the paper Media Production Workshop was a massive achievement that I hold highly because creating film and stories is a passion of mine.”

Now in the second year of his degree, Peter has some great advice for other students.

“My advice would be to make new friends and surround yourself with a group that will uplift you, not break you. Stay true to yourself and remember why you want to complete your studies. Never give up and give it everything you got. C’s get degrees but A’s help you reach mountains that you never thought you could walk up.”

A fresh start
He first experienced AUT during the UniPrep university preparation programme, says Peter whose studies are supported by an AUT Woolf-Fisher First-in-Family scholarship.

“UniPrep helps high school leavers transfer from secondary school to university, and prepare for their first year of uni. The programme has given me the ability to feel confident and prepared to start university.”

The transition from high school to university had some challenges, he admits.

“It’s a very big jump between school and university, and it had an impact on my performance at first. I came from a school that predominantly had Pacific students, and AUT was very different from that. It’s one of the most diverse places I’ve ever been to, and I’ve met some amazing people from different ethnic groups.