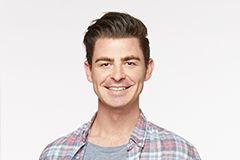 Director of Music for Australia and New Zealand, TikTok
Bachelor of Communication Studies in Radio

Anyone who works in radio will tell you they love the immediacy, says AUT alumnus Ollie Wards who completed a Bachelor of Communication Studies in Radio.

“We can have a funny idea and it's on air the next minute. But the audience is also right there with us – they're always funnier, can make your idea better or were there at the thing you're talking about.”

Ollie knows what he is talking about; he spent 10 years working for Australia’s Triple J radio station before recently joining TikTok as its first director of music for Australia and New Zealand. In his new role, he is responsible for creating connections between the music industry and TikTok’s 500 million users.

A career full of unreal experiences
He has had some amazing experiences throughout his career says Ollie who graduated from AUT with a Bachelor of Communication Studies in Radio in 2005.

“Just thinking about what I've done so far is pretty surreal. For example, I co-hosted the centenary of Anzac Day live from Gallipoli. As the dawn service happened I was there at Anzac Cove with a radio mic, telling people listening from all over Australia how it felt.

“I also got to see and meet so many of my favourite bands. One time I even played poker with Ice Cube and his son in a video shoot, which was fun and pretty damn intimidating.”

At triple J, Ollie was responsible for the station’s content on air, online, on TV, in social media and at events.

“Triple J is a national station with over two million weekly listeners and millions of followers of our content including the Like a Version weekly live music video. Having two million plus music loving and creative people wanting to join in was the best. Live and interactive; there's no other medium quite like radio.”

“People always say to me they'd love a job in radio and I then ask, 'What have you done so far?'. Usually it’s not much. My advice is to volunteer at your local community or student station, review music for street press, make your own content for socials or a podcast.

“Study what the people you like do, think about how you could be involved – not just on air. Then make it happen.”

After graduating from AUT, Ollie decided the best way to get a job was to show up at RadioWorks each day, determined to get more experience. His commitment paid off, and he was offered a full-time job at The Rock where he stayed a couple of years, putting his learning into practice.

After working at The Rock, Ollie moved to the UK where he worked in radio in London, before moving to Australia to join triple J.