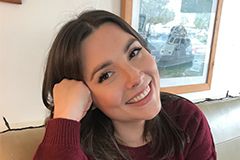 Four years after graduating, AUT digital design alumna Olivia Farrar has already worked on some of the world’s biggest movies and for five of the biggest players in the world of visual effects, including Weta, Framestore and Imaginarium.

“Ah man, where do I start? Weta Digital was my first job out of uni, which was amazing. I was a motion editor on Valerian and the City of a Thousand Planets and War of the Planet of the Apes. I'll always be thankful for Weta; it opened up my eyes to so many opportunities. I only have fantastic memories and hope at some point I will return there in my career.

“After that, I moved to London to work for Andy Serkis at Imaginarium. Then I lived in Bulgaria for five months, building a motion capture stage and training up a team at 22 years old, for the new Hellboy film that was being made at that time. I returned to London and continued to work for NuBoyana until Framestore came along."

She has now been working at Framestore for nearly two years.

“I've been exposed to so much more than just performance capture, including on-set, photogrammetry, camera work and more. I'm both the stage operator and facial performance technical director. I've worked on quite a few projects now. My most recent work was on the new Spider Man: Far from Home movie. That was amazing. I ran all of the performance captures, processed all the mocap data and delivered it to the animation team, by myself! It  was a great challenge. My first Marvel film."

The path to success
There were many highlights throughout her studies, says Olivia who specialised in VFX and motion capture while she was at AUT.

"University was such a special time of my life as it truly gave me direction of where I was going in life. I remember doing very well in my classes but I loved what I did so it only made sense and gave me reassurance that I was taking the correct degree. I was extremely proud when I received the visual effects award and the award for most dedicated student.”

She loved the many projects she got involved in at AUT, says Olivia.

“I was involved in multiple projects during my years at AUT, including being picked to run a huge project in my second year, creating animation shorts for Auckland’s healthcare, and working for companies on small projects around Auckland.

“In my last year, I met Matt Aitkin, a Weta legend! That was amazing, and being able to show him my final-year work, and see him impressed and take my name for the future made all the hard work worth it.”

Advice for other students
Just go for it, Olivia advises.

“The film and game industry is crazy but it's worth it. Work hard, find your passion but be open to change because it will definitely come with every new job you take on. I believe it’s the most exciting industry to be involved in and one of the most rewarding ones. Yes, contracts come and go but that's the exciting part of it, moving around is all part of the fun.

“Make the most of it while you're young and still trying to discover what your true passion is because there's plenty of jobs out there that you have no idea about. Take every opportunity when it comes along. Every job I've had I've never been 100% of everything but my drive and dedication to learn has gotten me to where I am today. Obviously skills will come, but I've learnt that you can't teach drive and enthusiasm. More often than not companies will hire someone with drive and positivity over someone who's just boringly clever. Enjoy the rollercoaster."

"I learned many skills, both technical and personable, at AUT. Working hard and introducing yourself to other creatives in the industry is a must – go to industry events, introduce yourself, make yourself known! You never know by meeting someone new what opportunity could be around the corner... I wouldn’t be where I am today – 25 years old, having worked for five massive companies – without the hard work and passion I have for this industry."