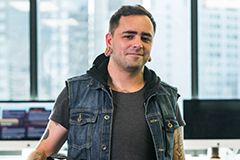 If you want to be on the cutting edge of technology, entertainment and linguistics, English and new media studies is a great choice, says Nick Jones.

“I wanted to learn how to write creatively, but was aware that I would need a day job as well, so I decided I would equip myself to teach English one day. After speaking with AUT, the conclusion was that English and New Media studies was the best step forward for me.

“I would absolutely recommend this programme. It gives you the freedom to find what you’re interested in and create your own career around that, rather than simply following in the path of everything that has been done before.”

Designed for change
The interactive learning environment has been one of the highlights of his studies, Nick says.

“I’ve had so many great teachers at AUT. The lecturers aren’t content with simply standing in a lecture hall and barking at me like other universities might; they’re working alongside me as mentors and co-workers rather than superiors. This has allowed me to flourish in my work at a rapid speed.”

AUT is progressive in what it teaches but also how it teaches, he says.

“The lecturers see us as a collective of people working together to discover new things and create exciting innovations in all sorts of different areas of society. The fact that the learning environment enables collaboration between students and teachers makes AUT an important university in today’s changing world, as people of my generation and younger are interested in relationships rather than hierarchies.”

A transmedia approach to storytelling
After completing his Bachelor of Arts in 2016, Nick took his understanding of new media even further with a Master of English and New Media Studies, and he is now studying a Master of Creative Writing (Screenwriting).

“I was quite successful with my bachelor’s degree, so I decided to take it further and give myself a better chance to break into the industry. Since then, my focus has been on developing stories in a transmedia environment. In 2017, as part of my master’s thesis, I developed and helped implement a video game narrative for a commercially successful virtual reality game called Orbus VR.

“For my current studies, I’m developing the script for a feature-length horror film, which is already garnering interest from industry leads.”

His studies have also opened up doorways into academia, says Nick who also works as a teaching assistant at AUT.

“Through my research and various disciplines, I’ve been fortunate enough to develop a unique knowledge base, which has allowed me to step into a teaching assistant role at AUT. Alongside my work in narrative design, I’m now helping build up other students and direct them down similar paths to my own.”