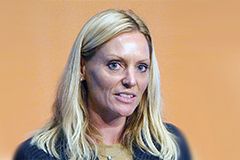 Being able to provide valuable support to the football community in New Zealand is satisfying, says Dr Michele Cox who is the chief executive of the New Zealand Football Foundation.

“The New Zealand Football Foundation aims to create a better New Zealand through and for football. We focus on traditionally underfunded areas of football – youth, women and girls, social impact and innovation. Underpinning these strategic pillars are increasing access to the game and alleviating any hardship that exists in football. It feels really great to be able to help achieve these goals.

“We manage a large capital fund and, based on the interest generated from this fund, we provide funding to worthy football projects across the country. I oversee the distribution of these funds and also the generation of additional funding. The more money we raise, the more money we can give out to the New Zealand football community. I’m a former Football Fern so I enjoy being able to support the football community in New Zealand, particularly in the areas that need it.”

Michele has always been passionate about sport, and over the years her career has taken her to every continent, working for organisations as diverse as FIFA, UEFA, New Zealand Football, New Zealand Cricket and Hockey New Zealand. She is also the successful author of a number of books. While she has had many career achievements she is proud of, one particular moment stands out.

“I have a lot of things I am proud of but probably the most impactful was achieved in my role as strategic advisor to Prince Ali bin Al Hussein, the former FIFA VP of Asia. We fought to allow women and girls to wear headscarves on the field of play. It was a very tough and political international campaign that ended up involving organisations such as the Nobel Peace Foundation, FIFPro and the then US Secretary of State. After 18 months, we finally succeeded in having the issue clarified, enabling millions of women and girls who wear different forms of head covers to play soccer.”

Returning to academia
In between her busy career Michele also found time to return to academia and complete a PhD in physical activity and health promotion.

“For me it was about completing my academic studies. I understood that a PhD isn’t just about the specific topic but also about completing a very valuable process. My doctoral research focused on the responsibility for children’s physical activity. I chose this topic because I was concerned about children becoming less physically active and more obese.”

“My supervisors were the best at what they do – knowledgeable, caring, practical, and most importantly motivating. They kept me motivated when I was very busy and travelling a lot internationally for work. My supervisors were outstanding and we’re still friends today. I also have a lot of respect for the people I studied with and the wider staff who work in the department.”

“My advice would be to pick supervisors who you relate to, and try to pick a subject you really love.”

Think carefully about trying to balance study with work, she adds.

“Ideally don’t work and study at the same time. Focus and concentrate on something you love to do. When I was completing my PhD, I moved to Switzerland because I was working for FIFA as a consultant to their then 209 member associations. That meant I could only complete my studies part-time. Considering how busy I was at that time, completing my PhD was a real achievement.”