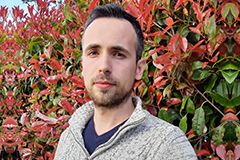 He has always had a creative spirit, says Marco Andrew Staines who studied a Bachelor of Design in Digital Design with a minor in motion capture.

“Before deciding to come to AUT to study I was working as a theatre actor in London but I eventually decided to nurture my side hobby of 2D drawing. When it was time for me to come back to New Zealand, I spoke to a lecturer who suggested AUT’s digital design degree with a minor in motion capture. That was an excellent way for me to combine my passion for performance and character creation with my drawing and design skills.”

He enjoyed having the freedom to create his own projects at AUT.

“It's daunting at first but I've enjoyed every single assignment in my degree, and that’s because I was free to concept, design and finish each of my ideas. I really enjoyed being able to problem solve and figure out the best way for me to animate a character, using motion capture or keyframe techniques. One of my lecturers, Jason Kennedy, also helped me understand how a passion for acting and performance can be transferred into an animation career.”

Making an impact
For Marco, the highlight of his studies was creating his final-year project, Voyager, a 3D animated short about an alien traveller.

“Concepting Voyager was a bit of a lightbulb moment for me. It’s the story of an alien visiting past memories of a deserted version of our planet Earth. It was a simple idea but the visual potential of it gave me an immense push to finish the project from concept to final edit.”

The end result has certainly paid off and has earned Marco some well-deserved recognition.

“At the end of my third year I won the Head of School Award in the digital design department for Voyager. The film was also a finalist in the New Zealand Best Awards and was selected as a finalist by a few festivals around the world. I think seeing Voyager out there in festivals is one of the most rewarding feelings I've had so far as a digital designer. It was reassuring to see so early after graduation that people enjoy my work.”

“I'm in charge of concepting, 3D modelling, texturing and rigging digital garments for our digital avatars. I create game-ready t-shirts, jeans and more with the use of software such as Marvelous Designer, Maya and ZBrush. I previously worked as a facial data technician and was promoted to computer graphic artist earlier this year, and have shifted from geo and skin creation responsibilities to wardrobe.”

It’s a career he thoroughly enjoys.

“I love the company I work for and I enjoy bringing what I learned at AUT to my daily work. I've also learnt a lot more about my career thanks to this experience, and I see myself helping technically and creatively in the finalisation of many of the company's projects.”

“I really encourage students studying this degree to find and practise the skills they learn at AUT as much as possible, even before the end of the third year. There are often scholarships and internships, or lecturers looking for help on their projects, and I think all of these experiences count so much when you're no longer a student and looking for work.”

Marco himself has made the most of such opportunities, including being offered a Prime Minister’s Scholarship of Asia at the end of his second year.

“This was a scholarship that enabled some of the best design students to go abroad for work experience. I was given funds to go to Hong Kong for one month during the summer holidays and I worked in the design department of a toy manufacturing company, called Trends2Com.”