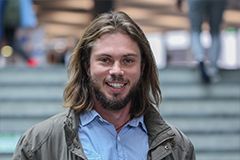 He is living his childhood dream, says Julian Braatvedt who now works as a wildlife cameraman.

“I’ve always had a passion for Africa, and now almost all of my work is based in central and southern Africa. When I’m filming things like gorillas in Rwanda I can’t help thinking how amazing it is that someone is actually paying me to film this. For me, this is a childhood dream come true.”

There have been many highlights in his career as a wildlife cameraman, says Julian who has been working as a camera operator for the past five years.

“One of the things I’m particularly proud of was filming wild dogs and hyenas for National Geographic Channel’s Africa's Hunters. Wild dogs are historically difficult to film, and I’m very proud of the footage I’ve managed to get for Africa's Hunters. My next project will be Camp Zambia, a Canadian production filmed in Zambia’s South Luangwa National Park.”

Spreading the conservation message
While there is worldwide demand for amazing footage of animals in the wild, the AUT communications alumnus wanted to take his work one step further.

“In addition to my work, I’ve also created the short film Elephant I Miss You, in conjunction with the Lilongwe Wildlife Trust. This is a passion project, focusing on creating a conservation dialogue with local African communities.

“In Malawi, elephants are expected to become extinct in 10 years’ time due to poaching, and my film aims to encourage Malawians to look after the elephants for future generations. I scripted the film in English and then had it translated into Chichewa, the local language.”

Now being shown in communities around national parks and wildlife centres across Malawi, Elephant I Miss You will also screen at the Wildlife Conservation Film Festival in New York later this year.

“When I applied for AUT’s Bachelor of Communication Studies, I thought I wanted to become a war journalist. It was only a little later that I realised it wasn’t the right choice for me, and by my second year at AUT I knew that I wanted to pursue documentary filmmaking as a career.

“I had always loved wildlife but thought of it as a passion rather than a career. It's been a small industry in New Zealand and it was only when I went to the UK after graduating that I realised how big the industry is, and I knew that I wanted to pursue wildlife filmmaking as a career.”

The great thing about a communications degree is that it’s so broad, says Julian who received a Vice-Chancellor’s Significant Student Scholarship to study at AUT.

“I think what made communication studies such a good degree for me is that we covered a wide range of media-based skills. We didn't have to specialise until later in the degree and it gave me a chance to explore radio, public relations, journalism and short film. Ultimately I think it gives you a broad base of career-relevant skills from which to start a media career.”