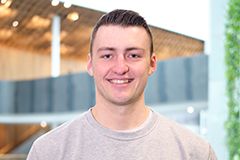 Getting involved in teams and projects outside of your usual studies can have a massive impact on landing a job straight out of university, says business alumnus Jordan Sanford who now works as a graduate financial risk analyst at the New Zealand Treasury.

“One of the achievements I’m particularly proud of throughout my studies at AUT was being part of a team of AUT business students representing the university, and later New Zealand, in the 2017 CFA Institute University Challenge. Our team made it to the Asia Pacific semi-finals in Malaysia where we presented our research on a company listed on the NZX against some of the best finance schools in the region.

“Opportunities like this don’t just help make your CV stand out, but also enable you to gain tangible experience and develop the soft skills employers are looking for.”

Finding his passion for research
Working on an applied project with colleagues from AUT's School of Economics was another highlight for Jordan.

“Over the summer of 2017/18, our team was tasked with writing a literature review on the economic theory of charitable giving. Along with the project, our supervisors also conducted workshops where we covered a range of topics, met with experts in the field of charitable giving and gained insight into the world of policy analysis.”

Working on the applied project didn’t just enable Jordan to apply the theory he had learnt; it also convinced him that conducting further research was something he wanted to do.

“Through the applied project, I had begun to read a lot of literature on laboratory experiments and incentives to promote charitable giving. The literature had identified donors that show ‘irrational behaviour’ when faced with essentially identical subsidies.

“For my Bachelor of Business (Honours) research I investigated if we could expand on this effect and further nudge participants to donate more using nonlinear subsidies for charitable giving against equivalent linear subsidies. My research was supervised by Dr Peer Skov and Professor Gail Pacheco.”

Supported to thrive
He would 100% recommend the AUT business programmes to others, Jordan says.

“I really felt that my lecturers and supervisors were invested in my development, and would go out of their way to provide any assistance, advice or opportunities they could. I had previously attended another university where I didn’t feel engaged in the lectures and workshops. I decided to attend AUT after friends recommended it.”

He appreciates the assistance and advice of his supervisors when he was facing any challenges during his studies.

“For me, some of the biggest challenges I faced were during the CFA university challenge and while completing my honours dissertation. My supervisors’ input ultimately helped the CFA team win the New Zealand finals and allowed me to complete my degree with first-class honours.”