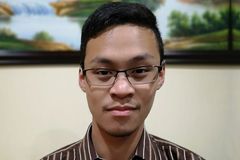 Final-year student, Bachelor of Science in Astronomy and Computer Science

He appreciates AUT’s diverse and supportive culture, says Jonathan Abiad who is about to complete a Bachelor of Science in Astronomy and Computer Science.

“I’ve seen every ‘type’ of person succeed at AUT because of how willing the lecturers, teaching assistants and other staff are to help their students.

“I found that I could easily approach the people I needed to if I was struggling, regardless of their position and the problems that I needed help with.”

Finding the right path
It was the opportunity to study astronomy that initially attracted him to AUT, Jonathan says.

“Astronomy has always been something that’s fascinating and unique to me, and since everyone else in my class was doing engineering or health sciences, I chose the one science that was different and stands out.”

To broaden his career opportunities, he however soon decided to add another major and from his second year at AUT Jonathan studied computer science as well as astronomy.

“At the end of my first year at AUT I decided to add computer science because of how much I enjoyed the first-year paper Programming for Engineering Applications. I could also see that my career options would increase by adding a second major.

“I would say though – don’t wait half a year to realise that you want something else to make your degree shinier. Think hard and do some research first; otherwise you’ll be at university for another year or end up having to take extra papers like I did, both of which aren’t ideal."

“My advice is to learn the balance between studying and having fun really early. It’ll save you a lot of time and you’ll maintain most of your sanity.”

Don’t forget to make the most of the academic staff, he adds.

“Talk to your lecturers and teaching assistants, ask for their help and make good connections.  AUT has some really great staff that I flaunt around to make my friends at other universities jealous.”