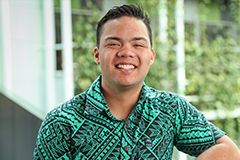 The constant encouragement to broaden his horizons is what he appreciated most about his time at AUT, says communication studies alumnus Jamey Vaa’etasi Solomua William Bailey.

“There were frequent reminders that the opportunities are there for those that want to take advantage of them. I think the teaching style throughout my degree really fit well with my personality. AUT always wanted to see me do well, and I can’t thank them enough for all that their support has enabled me to do.”

Whatever you want to do, just reach out and get stuck in, Jamey advises other students.

“There will always be someone on campus who is going to back you and if not, they’ll put you in touch with someone who can. Take advantage of every opportunity that comes your way, and chase those you think might be out of reach. This is the same for your fellow students. Communications is full of talent and their willingness to help you out should never be underestimated.”

A passion for telling stories
He started his degree convinced he would major in radio, Jamey says.

“I had decided early on in high school that telling stories was what I enjoyed most, and radio seemed the most obvious choice. Throughout my first year at AUT I was introduced to a whole world of production mediums, and towards the end of the second year it was clear that video had become the medium I felt most powerful with. Having graduated alongside my TV family in December 2018 I can say that the decision to follow my passion has been one of the most rewarding of my life.”

Even today Jamey misses spending time in such a creative space, which constantly provided him with great inspiration and even better company.

“Working so closely with our tutors really broke down the power distance between teacher and student. I felt I could be open and honest about any of the things going on in my life – both uni related and not – and I’d be met with compassion and guidance every time. Another highlight for me was releasing my short documentary, Plastic Polynesia; my first steps in to the world of discovering identity among Pacific youth.”

Making a difference to indigenous artists
After graduating at the end of 2018, Jamey is now interning at the National Museum of Natural History, which is part of the Smithsonian Institution in Washington, DC. He got the sought-after internship through the AUT Internz International Scholarship Programme.

“I applied for this internship after a visit from AUT alumnus Toiroa Williams who spoke during one of our TV classes of his adventure with the Sundance Institute through the AUT Internz programme. What I’ve enjoyed the most about being with the Smithsonian is how rewarding the work is – I love facilitating the developing relationship between Māori and the Smithsonian.”

There have been many highpoints throughout his internship, Jamey says.

“Working on the Mother Tongue Film Festival was really enjoyable, and we managed to quadruple the number of total attendees from last year's 500 to having over 2,200 this year. That was a great reward for the hours we put in.

“I've also just finished creating a film about New Zealand performance group Tuku Iho, who visited the Smithsonian in 2017. They carved and donated a waka, and delivered performances and interactive workshops throughout their stay. Next month, I’ll meet this same group in Hawaii. The Smithsonian is funding them to travel and teach the youth of Hawaii about the traditions of their ancestors and how important the carving of va'a is to them. Really cool stuff.”