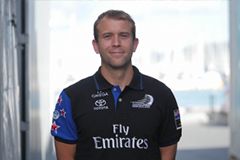 He loves every aspect of his job, says Hubert Woroniecki, the man behind the punishing physical training that helped Emirates Team New Zealand bring home the America’s Cup.

“My job involved the development and implementation of all physical, physiological and mental training programmes to prepare for the America’s Cup. I’m extremely proud of being the youngest ever America’s Cup winning head trainer, and running a two-and-a-half year campaign by myself as my first full-time contract after university.”

As head physical trainer, Hubert supported Emirates Team New Zealand through the changes in training technique to prepare the crew for powering the boat using their leg muscles, rather than the traditional method of using arms and shoulders.

“I was involved in anything from the delivery of the training sessions, and injury prevention and rehabilitation programming, to acting as a nutritional advisor for the team chefs when they were preparing the meal plans.”

Since the 2017 America’s Cup, Hubert has been using his skills to support the French national boxing team.

“In in my final year at AUT, I completed workplace experience at the AUT Sports Performance Research Institute New Zealand (SPRINZ). My project involved monitoring the heart rates of the team members while they were racing. The data was then used by the Emirates Team New Zealand physical trainers to design sailing-specific programmes.”

His studies gave him the opportunity to do what he loves, the AUT alumnus says.

“Thanks to my time at AUT, I now have the career I’ve always wanted. I’m using the skills I developed at AUT to make a difference in every aspect of my organisation. Everything I do professionally draws on what I learned at AUT. Even the skills I’ve learnt since working within the field can be linked back to the mentality that learning never stops; a way of thinking that is emphasised at AUT.”

New thinking and action
He chose to study at AUT because of the reputation of the School of Sport and Recreation, says Hubert who graduated in 2013.

“I decided to study at AUT because it’s renowned for its involvement in sport, and has a good reputation for not only focusing on academic skills but also on the personal skills that are crucial when beginning any career.

“AUT isn’t afraid to change its methods based on new research and new findings. It’s a university that constantly strives to find out more about the world, which allows for the discovery of new and exciting information that can lead to progress in many fields.”

The people were the highlight of his time at AUT, Hubert says.

“What I’ve cherished most were the contacts gained and relationships formed with the lecturers and other students. AUT has been a major factor in any successes I’ve had and I believe that one of the reasons for this is that I enjoyed the company of those involved.”