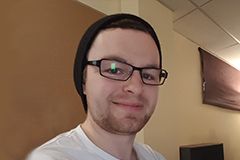 Working for one of the world’s top visual effects studios is very much where he wants to be, says AUT digital design alumnus Gareth Matthew Prosser who now works for Weta Digital.

“I enjoy the team player attitude and the overall environment of the motion capture department at Weta. I’m slowly but surely getting opportunities to step up, and gain more skills and responsibilities within Weta, a company that globally excels in the visual effects industry.”

Since joining Weta in 2016, Gareth has already worked on a number of high-profile movies, including Valerian and the City of a Thousand Planets and War for the Planet of the Apes. He frequently draws on the skills he developed during his time at AUT.

“The technical principles I learned at AUT have helped me understand the Weta approach to work. However the biggest skill you’ll need to succeed is communicating with people within the industry and building a wide range of contacts.”

Finding his passion
Choosing where to study was easy, says Gareth who has always been interested in film and animation.

“I chose AUT because the digital design degree gave me the opportunity to learn a wide range of skills in the film and animation field, supported by a range of sophisticated facilities.”

By his third year, it was clear that motion capture was the area he wanted to specialise in.

“I became really involved with the new motion capture facilities at AUT, using them to produce work not available anywhere else. I also learned to operate the motion capture technology on my own, assisting other students and gaining more responsibility within that space. This environment also saw me gain many industry opportunities, with clients recruiting me to help them with motion capture.

“I was part of the motion capture team that recorded and tracked motion capture data for the 25 April film directed by Leanne Pooley. I was also fortunate enough to receive a summer research scholarship, joining a research team to improve motion capture as a practice for both students and industry.”

“If there are ideas you want to try or facilities you want to experiment with, don’t hesitate to ask your lecturer about it and make it happen. University is about bringing out the best of your ability, so don’t hold yourself back.”

AUT was open to the ideas he wanted to pursue, he adds.

“AUT gives students with enthusiasm and determination the chance to interact with word-class technology and learn industry techniques otherwise not available at most universities. My experience was very flexible, and the evolution of technology meant that our approach to work was always changing too.”