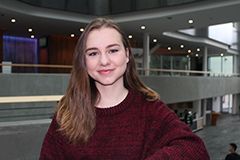 The world we live in is shaped by technology and she wanted to be part of that, says Calli Bates who completed her Bachelor of Computer and Information Sciences in 2018 and is now a software engineer at ZOZO New Zealand.

“Everything is becoming digitised and automated, and there’s endless potential for what could be automated next. It feels like a technology revolution, and I wanted to be involved in that.

“At ZOZO, we’re leading innovation in fashion technologies using machine learning, artificial intelligence and image recognition algorithms to create things like the 3D body measurement system known as the ZOZOSUIT, which was recognised by Time Magazine as one of the best inventions of 2018. It’s some pretty exciting work and I couldn't imagine somewhere I'd rather be with my career at the moment.”

Choosing AUT
Choosing where to study was easy, Calli says.

“I had visited campuses for tons of universities, in New Zealand and America, but AUT always felt right for me. Now, I realise that it was probably the community feel that attracted me to AUT. It seems like no matter what you’re doing, everyone is willing to help each other out. Between the students and staff, there’s an incredible network of support.”

She says she would highly recommend the Bachelor of Computer and Information Sciences.

“What you learn is obviously valuable in the tech industry, and the papers tend to shift every year to keep up with what’s new in the industry. The longer that I spend away from university, the more I recognise how much studying at AUT truly prepared me for a successful career in technology.

“In my final year at AUT, I also got to be a part of the Huawei 2018 Seeds of the Future programme, which took me to China for three weeks to experience Chinese culture and learn about the technologies there at the Huawei headquarters in Shenzhen. It was an incredible experience and probably the coolest trip I’ve ever been on.”

Advice for other students
Study something you’re passionate about, advises Calli who received the ANZ Award and was recognised as the Top Female Undergraduate Student for her programme of study.

“Find the field that makes you excited just thinking about, and then go after it.”

Don’t let anyone convince you that it’s not right for you, she adds.

“As a girl pursuing a technology career, at first I felt out of place. I got some weird looks from people when I told them what I was studying and what I wanted to do. If I had let what everyone else expected me to do shape where I’m going in my life, I’d never have ended up where I am today. Going with what makes you passionate is the best decision you can make.”