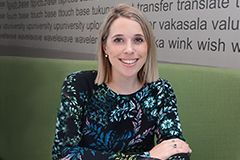 The best part of her job is learning about the world, especially when it has the power to change somebody’s life, says AUT journalism alumna Briony Sowden who is a broadcast journalist for BBC World News.

“I produce, report and output shows on BBC World News and for the BBC World Service (radio) and work across a number of award-winning shows including Global and Outside Source. I’m often blown away by the stories I’m writing about; real historic events that are shaping the political landscape.

“I’m surrounded by other journalists who are as driven by news and who inspire me to be a better journalist. Some of the people I sit next to and get to work with are the best in the business, and I'm constantly learning from them. They motivate me to strive to be better at my job and that in itself is rewarding.”

The second biggest newsroom in the world
As a broadcast journalist, Briony typically works on two major stories a day and all the content related to those stories.

“I work in the second biggest newsroom in the world. My day begins with an editorial meeting where we discuss the biggest stories of the day and how we want to cover it. We chase guests on the ground, put together our own packages, and bid for major players in stories. I also build and output shows, which gives me editorial control over the structure of a programme and which story has significance over another. I have to sub-edit and lead a team of producers – picking up mistakes before we go to air.

“I work in a gallery as the main contact with the presenter as the show is on air – so I have to write and update cues, brief correspondents on what questions they will be asked, and also take charge if there is any breaking news. Everything that you see on television is touched by a producer in some way.”

She also enjoys being involved in the planning for BBC World News, researching bigger stories and exploring the best approach to cover upcoming news events.

“Sometimes that means finding specialists on certain subjects, for example an economist who can speak about trade tariffs and help us understand more complicated stories and how they affect families, industries or small businesses from New Zealand to Singapore.”

A passion for foreign affairs
She has always been passionate about foreign affairs, says Briony who previously worked as a producer for Al Jazeera, based in the Middle East.

“Foreign affairs was something I was passionate when I was studying journalism at AUT, so I made sure I took elective papers on war and peace, and international relations. My end goal was to move overseas and tell what I perceived to be the real stories of the world.”

It was a chance encounter that opened the door to her first job in foreign affairs, Briony says.

“I met a journalist working for Al Jazeera who happened to be the foot in the door that I needed. Within a few months I’d moved to Doha for what was meant to be a three-month freelance contract, and I ended up working there for four years.”