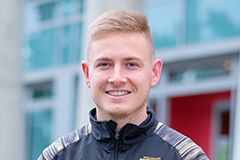 He loves that his career combines his passions of football, health and helping others, says Brendan Wyatt, a former competitive football player himself who is now the team physiotherapist for the Wellington Phoenix FC, as well as an ambassador for the Mental Health Foundation of New Zealand.

“My role allows me to work directly with the players and staff, and help rehabilitate them using the most recent and up-to-date research and protocols in relation to professional football to aid their return to the field of play. It also enables me to regularly travel abroad with the team, and experience a large variety of facilities, while being part of an organisation and community that inspires children and other members of the community.

“I’m surrounded by likeminded staff and players who are all driven towards being the best in their chosen field, and that mutual drive and sacrifice makes it so much easier to continue to support each other as a cohesive unit.”

As a passionate mental health ambassador, the achievement Brendan is most proud of is establishing a relationship between the Wellington Phoenix FC and the Mental Health Foundation of New Zealand.

“As a sportsman, there’s often a large emphasis placed on physical health, physical performance and wellbeing, however I’ve loved being able to use my experience and the club’s profile to highlight the importance of mental health and overall hauora (wellbeing) to the forefront of the general public. I’m fortunate enough to be in an environment that focuses on strong family values and supports my work around mental health in this country.”

“As a competitive football player, I spent plenty of time around musculoskeletal physiotherapists, and naturally had an interest in health and the human body. When I went through major injuries and subsequent surgeries resulting in permanent nerve damage this sparked my interest in helping others through their rehab journeys, and gave me a better sense of understanding and empathy which I try to use in my own practice.”

Deciding where to study physiotherapy was easy, he says.

“I had worked with various physiotherapists who had studied at AUT, and the university is well known for its physiotherapy programme. The other reason was that I was born in Auckland, and already had established networks and friendship groups here. I actually had the opportunity to head overseas for a football scholarship to the USA, however I would have had to diversify my study and I wanted to focus on the standard of my physiotherapy career over anything else.”

Inspired and supported
He had plenty of highlights throughout his studies, says Brendan who graduated from AUT in 2017.

“During my time at AUT the highlights would definitely be the extremely close cohort we had, and the diversity of learning and placement opportunities, especially working on the stroke ward in Waikato and at ABI (Acquired Brain Injury) Rehabilitation in Ranui. I thoroughly enjoyed seeing the holistic transition and raw emotion that came with the progress made by those who I was lucky enough to work with during my time.”

Another key highlight for him were the personal relationships and genuine interactions with AUT staff, especially when he was facing some personal and family hardships.

“The sincerity and care that I experienced during my time at AUT left a lasting impression, and helped me develop the sense of resilience and passion that I still try to apply in my physio career today.

“I’m especially grateful to Bronwyn Harman whose empathy, kindness and selflessness not only helped me through a difficult period in my life but also enabled me to achieve straight A’s. This not only further sparked my desire to apply those same personal qualities to my professional career, but further reinforced my passion of helping raise awareness around mental health in New Zealand.”