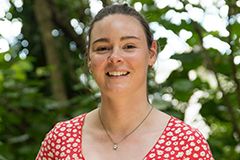 Research has always been her passion, says Annalise Taylor who is currently completing a Bachelor of Advanced Science (Honours) in Biomedical Science.

“I’ve always had a passion for science and particularly medical science, however it wasn’t becoming a doctor that was going to fulfil my passion; it was research. It was always my plan to do a standard three-year Bachelor of Science, however when I made a special trip to Auckland in my last year of high school to attend the AUT open day, I was told about the Bachelor of Advanced Science (Honours). Everyone I spoke to said if research was what I wanted to do, this would allow me to fast-track into a PhD and really kickstart my career.

“I’d definitely recommend this programme to others if you think research and academia is a career you want. The classes are generally quite small at AUT, so you can get to know the other students as well as your lecturers on quite a personal level. You also have some freedom to play around with your courses, which can be a huge advantage and really boost you in the right direction.”

Having always planned to move into cancer research, Annalise says it was a summer internship at the Plant and Food Research Institute that opened her eyes to other options.

“Over the 2020/21 summer break, I did a 12-week summer studentship at the Plant and Food Research Institute. There were over 100 applicants for each position, so to be given the opportunity to work there was incredible and I loved every second of it. I became really captivated by the work they do, and want to explore more how plants and food relate to human and animal health.”

The right move
For Annalise, attending a careers fair in her hometown of New Plymouth inspired her to choose AUT for her university studies.

“I went to the annual careers fair and AUT’s School of Science brochure caught my eye. After picking it up, I engaged in a conversation with the man running AUT’s expo stall about AUT and everything it offered. I liked that AUT is a new and modern university that believes in putting forward ideas and making them happen. In the space of about half an hour, I went from not knowing what AUT was to knowing that this was where I was going to study.”

She is grateful for the support of the AUT Māori Liaison team, which made the transition from Taranaki to Auckland much smoother.

“Leaving home and moving to New Zealand’s biggest city where I barely knew anyone, and having to figure out general and university life, that was a massive thing for me. However, the AUT Māori Liaison team supported me throughout this, and I can’t thank them enough. The whānau room is such a safe space, and there are so many friendly faces that will help you with any challenge big or small.

“One of my biggest achievements was being asked to become a peer mentor through the Māori Liaison team. That was a real privilege to be recognised as someone who they believed would be able to provide academic mentoring and general university advice to first-year Māori science students.”

“Don’t give up. There’s nothing easy about university, however you came for a reason and just because it gets a bit hard sometimes that doesn’t mean you give up. Keep that reason tucked away somewhere and remind yourself why you’re here. Don’t be scared to ask for help when you need it. As intimidating as it is, be the person who puts their hand up and asks the lecturer to repeat or to clarify because rest assured you’re not the only one who doesn’t get it.”

It's okay to change the direction of your studies, she adds.

“There are so many things on offer at university, including some you may not even have heard of. If you don’t like what you’re studying or if you come across something different that captivates you, don’t be afraid to change. There’s no point wasting time and money on something that doesn’t excite you.”