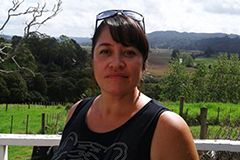 “My research explored Te Ruki Kawiti's 1846 final speech, known as Te Tangi o Kawiti – said after the signing of Te Tiriti o Waitangi in 1840 and the battle of Ruapekapeka in 1845, and its impact on resistance activities and the relationship between the Crown and Ngāti Hine, particularly in the Treaty settlement process. I hope my research encourages other Māori, Tangata Whenua and indigenous whānau to think about what research means to them and their whānau.”

Her thesis articulates different tensions and tolerances that Ngāti Hine navigates with the Crown and was driven by the key question: How does Te Tangi o Kawiti impact Ngāti Hine resistance to the Crown in the Treaty Settlement process? The research topic chose her, says Amadonna who was supervised by Elisa Duder and Professor Paul Moon.

“My grandfather's name Poai Pakeha comes from Kawiti's speech and I was raised largely in Ngāti Hine and Ngāti Te Tarawa. I’ve attended many Waitangi Tribunal judicial conferences and hearings over the past ten years and was the communications advisor for the Waitangi Tribunal. In 2016, I provided a brief of evidence in support of Ngāti Hine’s Te Tiriti o Waitangi claims. I moved back home to Ngāti Hine in 2009, and I want my tamariki to grow up knowing the kōrero and history from our tūpuna.”

The right time for postgraduate study
Her Master of Arts was her second time studying at AUT, says Amadonna who completed her degree with first class honours. The biggest challenge during the research for her was combining a te ao Māori world view with western academic requirements while keeping the mana of her topic intact, Amadonna says.

“Research has been associated with exploitation and extraction, and was used against our whānau and Māori people in the past.

“Utilising kaupapa Māori theory to facilitate a space for pūrākau and kōrero tuku iho helped me overcome the often conflicting space I found myself in. I’m thankful for the staff at Te Ara Poutama who provide a korowai of learning for ākonga like me to walk between the two worlds.”

She would recommend the Master of Arts in Māori Development to others, says Amadonna who received the Peter Harwood Scholarship to support her studies.

“The programme is crafted so you learn and can apply the learning directly to your research topic. It was challenging at times but I’ve learned so much.”

Honouring her ancestors
After completing her Master of Arts in August 2019, she now wants to use the skills and matauranga she gained from her studies to support her people and honour her ancestors’ aspirations.

“There is reference to the Treaty and Tiriti in Te Tangi o Kawiti and the battle of Ruapekapeka was the last Kawiti fought and won against the Crown. The battle symbolises Ngāti Hine's assertion of mana, rangatiratanga (sovereignty, authority, autonomy), freedom and rejection of colonial rule.

“While Te Tangi o Kawiti rejects colonial rule, affirms Ngāti Hine rangatiratanga and challenges the Crown and New Zealand government’s actions, paradoxically it is critical in the maintenance of peace and binds the Crown and Ngāti Hine together in a Tiriti relationship.”