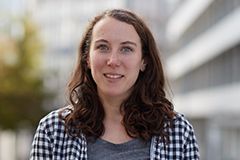 “When I was three years old, I fell in love with a giant squid from a book. Since then, I’ve always wanted to know more about deep-sea squid. After a master’s degree at the University of Kiel in Germany, I chose to do a PhD because it gives me the opportunity for self-directed learning. I wanted to be able to focus on a topic I’m passionate about and study it in depth.”

She was drawn to AUT because of the opportunity to work with Dr Kat Bolstad who leads the AUT Lab for Cephalopod Ecology and Systematics, says Alexandra who came to AUT as an international student from Germany.

“She is a world-leading expert in the field of cephalopod research. Apart from my supervisor, I wanted to study in New Zealand because it’s surrounded by oceans and is a hotspot for cephalopod biodiversity.”

Contaminants in oceanic food webs
For her PhD research, Alexandra is looking at heavy metals in New Zealand’s commercially consumed arrow squid and one of its main predators, the long-finned pilot whale.

“I’m interested in the flow of contaminants in oceanic food webs, with a particular focus on squid. I’m hoping to be able to advise people on their intake of heavy metals through squid consumption. The flux of trace elements in New Zealand waters is largely unknown and I aim to fill parts of this knowledge gap.”

She has already had opportunities to share her work with other researchers at the New Zealand Marine Sciences Society conference in Christchurch and in Dunedin, as well as at an international conference in Florida, supported by a travel grant from the Royal Malacological Society of London.

Alexandra’s research has been supported by a New Zealand International Doctoral Research Scholarship, the Royal Society of New Zealand’s Hutton Fund and a student research grant from Unitas Malacologica. Her PhD is supervised by Dr Kat Bolstad from AUT’s School of Science, Chris Pook from the Liggins Institute of the University of Auckland and Sally Gaw from the University of Canterbury.

The right path
She would recommend doctoral study at AUT’s School of Science.

“I enjoy the diversity of the people here and the friendly environment. I’ve enjoyed my PhD and would recommend this career path to anyone with passion, persistence and determination for a certain science project.”

Aiming to submit her PhD in early 2020, Alexandra already has a clear idea what she would like to do next.

“I’m planning to become a postdoc so I can further investigate pollution in the world’s oceans. I would like to raise public attention to pollution-orientated subjects and how to fix them. Ultimately, as an idealist, I could see myself in a policy-making role by communicating science outcomes to politicians and trying to find solutions for healthier oceans and a better planet.”