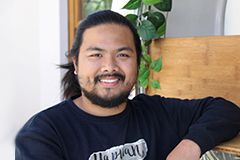 If there’s anything he can do the whole day, it’s cooking, says culinary arts alumnus Aldrin Tabora who is now introducing Aucklanders to fresh Filipino fare through his food truck Hapunan Filipino Cuisine.

“I’ll never get tired of cooking. Doing something you’re passionate about always makes the job more exciting and fun.

“I’ve worked as a chef for both Vinnie’s and Madam Woo, but the achievement I’m most proud of is building my own food truck business, Hapunan Filipino Cuisine, together with my fiancée Laura. Creating food with a focus on traditional Pinoy dishes started as a project while I was studying at AUT, and it’s now an up and running food truck business.”

Lighting the fire
After originally training as an engineer in the Philippines, Aldrin discovered his love for food after he moved to New Zealand at the age of 21.

“When I moved to New Zealand, I soon realised I would have to go back to university if I wanted to work here as an engineer. When I started working at Farro Fresh, I found my passion and love for food.”

He soon decided that he wanted to pursue cooking as a career and explored his study options.

“AUT offered a good quality education with awesome academic staff and, most importantly, industry standard kitchen supplies and equipment. AUT provides you with the knowledge and experience to prepare for the real world.”

Showcasing Filipino cuisine
The highlight of his studies was his final-year project, Aldrin says.

“We had to create a pop-up restaurant where we were serving a seven-course degustation menu. As part of this project, we needed to organise everything for this restaurant – from marketing the event, preparing the décor and organising front-of-house staff.

“Because some of us were Filipino, we decided to create a modern dining experience to showcase Filipino cuisine. This led to the name Hapunan, which translates as ‘dinner’. It was a great night and even the ambassador of the Philippines attended with his family. I received an A+ for the project, and everyone was really pleased with the result.”

However, the pop-up restaurant wasn’t just a great opportunity to apply his knowledge and introduce Aucklanders to Filipino food; it also helped Aldrin take the leap and start his own food truck business.