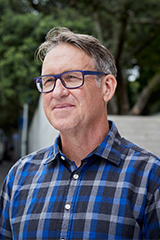 Tourism is important to the New Zealand economy and the people of the South Pacific Islands, but so is a sustainable way of life. Professor Simon Milne has been conducting research in this part of the world since 1985 and has a special interest in the links between tourism and sustainable community development.

The tourism industries of Tonga, Papua New Guinea, Vanuatu, Kiribati and Tuvalu are among a number that Professor Milne has analysed. His work in this sector takes him all over the world including Vietnam, Kenya and Russia. And the research conducted has benefited a range of international organisations including the United Nations Development Programme, the World Tourism Organisation and the European Union.

After completing a PhD in economic geography at Cambridge University in 1989, Professor Milne moved to Montreal, Canada where he taught at McGill University until 1998. During this period he became a world leader in tourism research establishing the McGill Tourism Group before his return to New Zealand.

He is now the Professor of Tourism at AUT and has been a director of the New Zealand Tourism Research Institute since its inception in 1999.

The promotion of education for Pasifika people has been a passion for Professor Milne throughout his career. Despite a host of accolades and achievements over the last 20 years, he regards the supervision of Dr Tim West-Newman - AUT’s first Pasifika PhD student - as a career highlight.