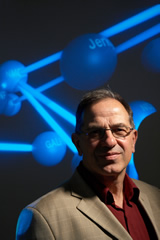 His main interests are in the areas of: computational intelligence, neuro-computing, bioinformatics, neuroinformatics, speech and image processing, novel methods for data mining and knowledge discovery.

Professor Kasabov is the General Chairman of a series of biannual international conferences on Neurocomputing and Evolving Intelligence in New Zealand. In 2011-2012 he was awarded an EU Marie Curie Fellowship. In 2012 he received the INNS Gabor Award and in 2007 - The Bayer Science Innovator Award for his innovative work on neural network applications. He also received The Royal Society of New Zealand Silver Medal for contribution to Science and Technology in 2001.