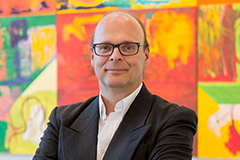 It was the early 70s television show "Justice" that inspired Professor Kris Gledhill into a career in the law. Set in England, veteran actor Margaret Lockwood starred as a barrister taking on the establishment. Watching it as a child Professor Gledhill says it struck him as something he’d like to do.

Professor Gledhill's more than 30 years in the law, as both a practitioner and an academic, has spanned many aspects of law but has focused on criminal law and human rights law, particularly international human rights. As a barrister in London he largely worked as a criminal lawyer and representing the rights of detained people.

Although he had always contributed to academia through teaching, journal articles and books, he became a full-time academic when he and his family moved to New Zealand in the mid-2000s to a role at the University of Auckland.

Professor Gledhill joined AUT Law School in 2016, attracted in part by the focus of AUT on industry connections and the willingness to integrate "real world" examples into academic learning. He has been involved in the establishment of the Centre for Non-adversarial Justice and the Centre for Indigenous Rights and Law at AUT Law School.

Although his practitioner status has dropped to part-time, he still likes to "get his hands dirty" providing advice to a number of barristers, and at a government level on issues such as health and safety law reform or human rights.

When the self-confessed workaholic is not on the job, he's likely to be found on his bike or at a music gig. Professor Gledhill is also involved in several charities, including road safety charity Brake, a UK-based organisation with a New Zealand branch.

He says success for him is about creating change, however incremental, and leaving things better than when he started his career. "I'm still in that idealistic class who dolaw because they want to make things better."

And having recently re-watched the "Justice" TV series he says it was still as brilliant as it was in the 70s.