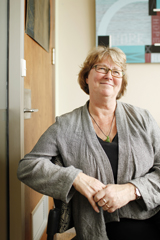 Professor McPherson’s desire to see research make a difference is a passion she has developed over a number of years studying and working across the globe.

Her research and experience in rehabilitation began with a clinical background, training as a registered nurse in Australia. She then became a midwife studying in Edinburgh and undertook a diploma of Health Visiting at Queen Margaret College, before completing an honours degree in psychology. She then studied at the University of Edinburgh finishing a PhD in rehabilitation exploring recovery and adaptation after brain injury.

The application of her research has not only had effect in the clinical sphere but also in policy within New Zealand having made contributions to ACC and a number of government reviews of rehabilitation and welfare.

Professor McPherson is an honorary professor at King’s College in London and has been a visiting scholar at both Massey University and the University of Auckland.

Her work has also given her fantastic opportunities including a mini-sabbatical in Paris in 2009, where along with being an invited scholar at the Universite Paris Diderot 7, she spent a little time falling completely in love with the city and speaking a little bit of French.