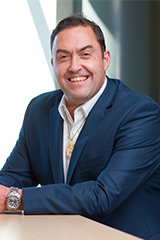 It’s the numbers that sing to Professor Jarrod Haar.

The Professor of Human Resource Management’s research areas include work-life balance, cultural factors in the workplace, leadership and the impact of technology on the workforce.

In 2018, his review of a trial by New Zealand financial services firm, Perpetual Guardian, of flexible working in the form of a four-day week, led to it permanently moving its workforce to a shorter work week. The findings, white paper and other articles on the four-day week are available on the 4-day week website.

Professor Haar began telling New Zealand stories with data at the prompting of a former lecturer at Waikato University, who was always referring to research articles from the American-based Academy of Management Journal.

When Professor Haar kept asking where the New Zealand studies were – the response was: there were none – he decided to focus his research on New Zealand.

With tribal affiliations of Ngati Maniapoto and Ngati Mahuta, his research into Maori employees has begun highlighting the unique factors associated with Maori in the workplace, including the importance of whanau and the significance of cultural values and beliefs in the workplace.

An award-winning writer and lecturer, Professor Haar has more than 300 refereed academic outputs (including 75 journal articles).

He is deputy director of the New Zealand Work Research Institute and is on numerous editorial board roles, including an associate editor on the Australian and New Zealand Academy of Management’s Journal of Organization and Management.

Professor Haar won the Inaugural Human Resource Institute Researcher of the Year Award in 2016 and in 2018, was appointed convener of the Economics and Human Behavioural Sciences panel, and sits on the Marsden Fund Council.