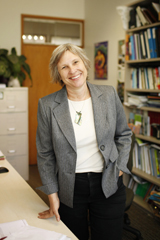 Professor Jane Koziol-McLain has over 30 years of experience in her chosen field of nursing as well as a talent for research into the health system response to violence against women and children.

She is the director of the Centre for Interdisciplinary Trauma Research while balancing teaching responsibilities and consulting work in the Pacific with the United Nations Population Fund. Through these opportunities and her education background Professor Koziol-McLain has worked in the United States, Kiribati, the Solomon Islands and Malaysia in a variety of roles and came to New Zealand as a continuation of her interests.

Professor Jane Koziol-McLain is currently leading three research projects, the first worth over a one million dollars from the Health Research Council of New Zealand, which is investigating an internet based intervention to improve mental health outcomes for abused women (www.isafe.aut.ac.nz). The second is an evaluation of District Health Board systems for responding to victims of family violence funded by the Ministry of Health and the final looks at women’s experience of health care after disclosing partner violence.

She has been recognised time and time again for her research and her work has won numerous research awards including an award for excellence in research from the Nurses Network on Violence Against Women International in 2003 and she was inducted into the Johns Hopkins University Society of Scholars in 2013.Her work documenting District Health Board progress in developing a system response to women and children at risk for family violence contributed to the Ministry of Health’s Violence Intervention Programme in 2007.