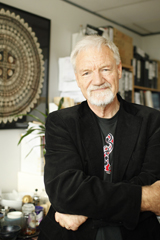 Professor David Robie is the Director of the Pacific Media Centre and a journalist of more than 40 years. For more than two decades he focused on covering the Asia-Pacific region.  He has reported on post-colonial coups, indigenous struggles for independence and environmental and developmental issues.

Professor Robie is editor of Pacific Journalism Review (PJR), the only research journal to investigate media issues in the South Pacific, Asia-Pacific, Australia and New Zealand.  Through his role as Director of the Pacific Media Centre, he manages Pacific Media Watch, a digital research of daily dispatches about Pacific journalism and media, ethics and  professionalism, and jointly publishes the high profile independent Asia Pacific Report with industry partner ForeignPolicy.nz.

He has written ten books on the region’s politics and media, including Mekim Nius: South Pacific politics, media and education, and a book about the bombing of the Rainbow Warrior, and Don’t Spoil My Beautiful Face: Media, Mayhem and Human Rights in the Pacific (Little Island Press, 2014). Marking the 30th anniversary of the Rainbow Warrior bombing in July 2015, his book Eyes of Fire was published with extensive new sections and images.

He was awarded the 2015 AMIC Asia Communication Award in Dubai, the first person in the southern hemisphere to receive this honour. In 2011, he was awarded a Vice-Chancellor’s Teaching Excellence Award. In 2010, he won the Creative Stimulus Award for innovation and contribution in “reporting hot topics” as editor of PJR at the inaugural Academy Awards of the Global Industries in Beijing, China. In 2005, he won the PIMA Pacific Media Freedom award for his contribution to Pasifika journalism education and media freedom in both New Zealand and the region.

He has been an Australian Press Council fellow and as well as editing PJR he is on the editorial boards of Asia-Pacific Media Educator, Australian Journalism Review, Fijian Studies, Global Media Journal and Pacific Ecologist. He is also currently New Zealand representative of the Asian Media, Information and Communication Centre (AMIC). Professor Robie publishes the media freedom and transparency blog Cafe Pacific www.cafepacific.blogspot.com

Dr Robie has previously been editor of the Sunday Observer (Melbourne), group features editor of the Daily Nation (Kenya), chief subeditor of the Rand Daily Mail (South Africa), correspondent/editor for Agence France-Presse (France), and editor of Insight magazine and associate editor of New Outlook magazine (New Zealand). He travelled extensively across Africa as a roving correspondent for Gemini News Service.