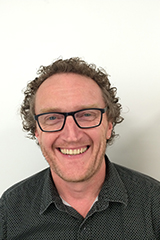 Professor of Chemistry
School of Science

Chemistry is critical to our everyday lives and yet the vast majority of the population spends no time thinking about it or its vital role in our world.

“Chemistry is the reason we live as we do, and it will be chemists who will make the discoveries that will ensure the continuance of life on Earth as we know it. The more that everyone on the planet knows about chemistry, the better our chances of survival will be.”

One contribution Professor Blackman has already made to chemistry education is co-authoring Australasia’s best-selling first-year chemistry textbook, which is currently in its third edition.

Throughout his career, his students have also acknowledged his talents in chemistry education by selecting him for several teaching excellence awards.

“Being able to teach and enthuse students about chemistry is extremely rewarding – you are teaching people about the stuff of which the universe is constructed, and you can’t get much more exciting than that," says Professor Blackman.

His own research is focused on the synthesis, structure and reactivity of coordination complexes, especially those containing substitution-inert metal ions. His work – which continues along the lines of Australasian interest in such complexes – involves the synthesis of new polydentate N-donor ligands, and the use of these to prepare coordination complexes having novel properties.

For Professor Blackman, research and working in the lab is a hugely rewarding part of his job.

“The thrill you get when you make a new molecule that has never existed on Earth before never diminishes. Being able to manipulate matter on an atomic scale and getting it to do what you want it to do is pretty incredible.”