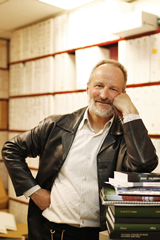 Professor Bell co-founded the Journal of Sociolinguistics and, until 2000, balanced his work in academia with roles in the media.

He has studied and researched sociolinguistics internationally, including in the USA and the UK. Professor Bell’s unique research has included projects on the likes of “fush and chips”, Marlene Dietrich and Babel. He leads the NZ arm of the World Internet Project, which encompasses 30 countries.

A passion for making a social difference is the catalyst for all this work. Professor Bell is especially well known for his theory of style, audience design, and for pioneering work on media language and discourse, and on New Zealand English, with the publication of The Language of News Media, just one of five books he has authored or co-authored in these areas.

During his career he also undertook advocacy roles and was involved in the government’s efforts to support, promote and sustain Māori language through broadcasting.

Institute of Culture, Discourse and Communication