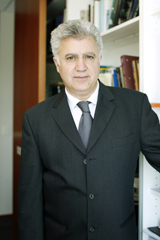 Professor Alireza Tourani-Rad joined AUT in 2004 to set up its Finance department within the Faculty of Business. Under his guidance the department’s research quality in a short time has shown tremendous growth – currently ranked number 10 among 53 in Australia and New Zealand.

Since joining AUT he has been responsible for more than 100 research outputs, including 30 published refereed journal articles, several book chapters, and a co-editied major book on ‘Emerging Issues in Corporate Governance.”

The quality of Professor Tourani-Rad’s work has been recognised nationally and internationally with more than 10 best paper awards including Best Paper Prize, ‘Is Corporate Governance Relevant during a Financial Crisis? Cross-country Evidence, 9th International Conference on Corporate Governance, Birmingham, UK 2011, as well as being the recipient of AUT Faculty of Business Outstanding Academic Leadership Award (2000-2010) and Research Excellence Award (2011). Professor Tourani-Rad is a fellow and member of several academic and professional organisations.

Professor Tourani-Rad has taught at universities in The Netherlands, Belgium and New Zealand.  He holds two degrees and a doctorate from three universities – Planning and Computer Applications, Iran, Catholic University of Leuven, Belgium, Free University of Brussels, Belgium respectively.