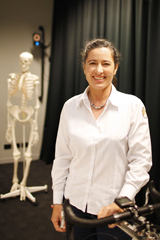 Professor of Human Performance
School of Sport and Recreation

Professor Patria Hume is a leading expert in sport injury prevention and sports performance biomechanics. She is a Fellow of the International Society of Biomechanics in Sports and is an editorial board member for journals Sports, Sports Medicine and Sports Medicine Open. Professor Hume is also the Director of the J.E. Lindsay Carter Kinanthropometry Clinic & Archive.

After completing a BSc and MSc (Hons) in Sports Physiology and Sports Psychology from the University of Auckland she completed a PhD in Biomechanics at the University of Otago. During her three year Accident Compensation Corporation (ACC) funded post-doctoral fellowship in Canada, Switzerland and Australia, Professor Hume developed the 10-point plan for injury prevention (now known as SportSmart) which has subsequently been adapted for sports such as rugby, netball, league and snow sports. SportSmart was adapted to BokSmart in South Africa. This research for ACC has led to ACC producing new SportSmart educational materials and new national ACC concussion guidelines.

Professor Hume is the lead researcher for the International Rugby Board long term player health outcomes study, and the player clothing and equipment review. She is also the lead researcher of a number of ACC projects focused on sports injury prevention.

She has a special interest in anthropometry – the study of human body measurement – and is one of only 14 certified criterion anthropometrists in the world. Professor Hume was a lead researcher for the Sydney 2000 Olympics anthropometry project and received an International Olympic Committee diploma for contribution to Olympic sport in 2001.

Prior to her career as an academic, Professor Hume was a world-class rhythmic gymnast. She represented New Zealand for six years, competing around the world including the World Championships in 1981 in Munich, Germany. She then spent six years coaching gymnasts who competed at Olympics and won medals at the 1990 Commonwealth Games in Auckland.

In 2016, she received the prestigious Geoffrey Dyson Award from the International Society of Biomechanics in Sports, in recognition of her international contribution to sports performance and injury biomechanics and sports injury prevention. That same year, she also received the Auckland University of Technology medal for outstanding contributions to research, teaching and service, as well as being a finalist for the 2016 NZ Herald New Zealander of the year.