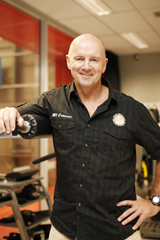 Professor of Strength and Conditioning
School of Sport and Recreation

For Professor John Cronin, being an academic and researcher is all about people. He sees his role as a Professor of Strength and Conditioning as the perfect nexus between consultancy, research and teaching. People, he says, are at the centre of that nexus.

Professor Cronin began his career as a school teacher in New Zealand and continued working in education in Vancouver, Canada where he gained postgraduate qualifications in sport science and coaching.

After completing his PhD from the University of Auckland in 2002, he was promoted to associate professor at AUT in 2005 where he has established himself as an expert in human movement research with a particular focus on the strengthening of muscle.

Research in high performance sport is a key focus for Professor Cronin who currently supervises a number of postgraduate students from New Zealand and overseas.

This work and associated invited speaking engagements, in tandem with his appointment as Head of International Partnerships for the School of Sport and Recreation, have meant that he travels widely, promoting AUT and in particular the work of SPRINZ.