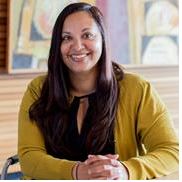 Contributing to social good through better decision-making is what drives Professor Gail Pacheco.

A Professor of Economics at AUT, and Director of the NZ Work Research Institute, Professor Pacheco’s career revolves around using real-life data to inform policy debate.

In particular, the majority of her research now focuses on linked administrative data. Many policy questions or debates require empirical evidence to inform the design of interventions or at the very least better understand the issues at hand. For a number of studies, Professor Pacheco has made use of the Integrated Data Infrastructure (IDI) – a large research database containing microdata about people and households in New Zealand. It includes data from a range of government agencies, surveys (including the Census) and non-government organisations, such as the Auckland City Mission.

Her recent research has included work to understand the social and economic cost of youth who are not in employment, education or training, investigating factors behind the gender pay gap, and exploring ethnic differences in educational participation.

New Zealand data drives the majority of her research agenda meaning much of her work is with New Zealand government agencies. These include the Ministry for Women, Ministry of Business, Innovation and Employment, Productivity Commission, Superu, and Ministry of Education.

Professor Pacheco, received the 2018 NZIER Economics Award in recognition of research that provides insights into social issues affecting the country. Selected by an independent panel, the NZIER Economics Award seeks to highlight “outstanding contributions to the advancement of economics and its applications in New Zealand”.

After growing up in Kuwait, and having to flee to India as a refugee during the Gulf War in 1990, Pacheco believes she has become a more resilient person, who doesn’t sweat the small stuff. She admits beginning her university studies wanting to be an accountant after reading at the time how many of the world’s most successful women were chartered accountants, but changed her mind once she began studying economics and maths at university. She completed her PhD at the University of Auckland in 2006.

Professor Pacheco is also the director of the New Zealand Work Research Institute, where the key objective is to contribute to high-quality research regarding people and work, with respect to labour market dynamics, employment relations, wellbeing and performance, diversity, and the role of technology in the workplace. In this role, there is a strong emphasis on a multidisciplinary and collaborative approach, alongside strong engagement with external stakeholders.

In addition to her roles at AUT, Professor Pacheco is the editor-in-chief for New Zealand Economic Papers.

Watch on YouTube: social and economic cost of youth who are not in employment, education or training

Factors behind the gender pay gap (Ministry for Women website)