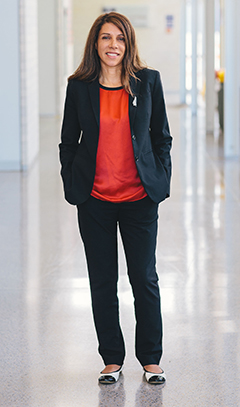 Professor of Physical Activity and the Environment

Progressing research that benefits people and communities has been an overriding theme of Professor Erica Hinckson’s career.

Professor Hinckson initially qualified in sport science – a fitting field given her successful athletics career in the USA, in which she claimed ten All-American titles, won 100m gold at the 1992 National Collegiate Championships, and recently earned a place on the University of California San Diego’s Hall of Fame in recognition of her exceptional contribution to UCSD Athletics.

She went on to obtain a PhD in Sport Physiology, but felt early on that neighbourhood environments may play an important role in the health and wellbeing of children, the future adults or future athletes. She turned her focus to physical activity and the built environment as a result, with a desire to affect large-scale change a driving force. With this has come a commitment to collaboration.

“The problems we are facing are big (global obesity epidemic), and I knew that working as part of a larger team would give me the best chance of addressing and consequently solving them,” says Professor Hinckson. This sees her working alongside community groups, local and central government, international teams and networks (International Physical activity and Environment Network & Council of the Environment and Physical Activity) and private organisations to achieve health and wellbeing gains for communities.

As the New Zealand lead for The Global Observatory of Physical Activity in adults, Professor Hinckson is also an advocate for change in the international arena. The Observatory aims to reduce the prevalence of physical inactivity – and with it disease and premature deaths attributable to physical inactivity – and examines physical activity surveillance, research and policy worldwide. “New Zealand doesn’t rate highly,” she says. “We have comparatively low levels of physical activity – much lower than we would expect to see as the sporting nation we pride ourselves on being.”

Professor Hinckson is interested in interrupting sedentary behaviour – whether that means changing the way we work and study by adopting standing desks, or enhancing the walkability of our cities to make physical activity a bigger part of our everyday lives. She focuses on translational research – research that can be applied for the benefit of people and communities – and believes co-designing and collaborating with communities to empower those affected is where real progress can be made.