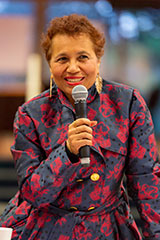 Picking up difficult contemporary issues, and unravelling them in a way that is palatable for an eclectic audience, is what propels and energises Professor Edwina Pio.

Armed with an innate sense of social justice, and a desire to live in harmony and in-tune with the universe, her robust research encompasses the intersections of work, ethnicity, gender, religion and Indigenous studies.

Professor Pio, a Fulbright alumna, is New Zealand’s first and only Professor of Diversity. She has meticulously carved a career for herself in the education space, carrying out critical research that is considered, balanced and respectful of the migrant and Indigenous communities whom she interacts with and honours, through the lens she chooses in her writing.

An accomplished and widely published author, Professor Pio takes a trans-disciplinary – sometimes tongue-in-cheek – look at migrant trajectories at work, education and in business. Her research in New Zealand and abroad displays her fierce will to have stories that often remain on the fringes told, and told justly, from both sides of the coin. She is emphatic about making research relevant to individuals in their own lives and the organisations where they work, but also important reference points for decision makers who can effect and implement crucial policy changes.

Professor Pio believes prompting conversations about difficult and meaningful issues is a fundamental part of effecting change, and she ‘stimulates’ a lot of these conversations through her work with a number of organisations such as the Human Rights Commission, the Office of Ethnic Communities and New Zealand Police.

Her regular visits to Boston College in the United States as Visiting Professor have a re-energising effect on her own research. The comprehensive, analytic Jesuit style of intellectual enquiry imbued with liberation pedagogy, is the way she would like to see more research in New Zealand carried out.