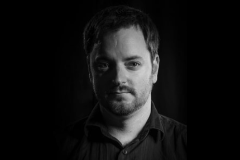 Steffan joined AUT’s School of Computer and Mathematical Sciences in 2013, and has taught a variety of programming-related papers on the Certificate in Science and Technology and the Bachelor of Computer and Information Sciences. He currently teaches across all levels, including the third-year Game Programming paper where students get the opportunity to work in teams and implement their own game ideas.

He has programming experience in C, C++, Java, C# and various assembly languages, and game and real-time computer graphics programming with industry standard APIs, such as DirectX and OpenGL. Steffan also has experience with in-house game engine development, as well as developing with commercial game engine middleware, such as Criterion’s RenderWare, Emergent’s Gamebryo, and Havok’s Vision.

Steffan is an active member of the New Zealand game development community and attends the monthly Auckland Game Developers’ Meet-ups held at AUT. He also engages in external consulting with local industry and educational institutes.

Prior to joining AUT, Steffan held the position of Senior Lecturer – Game Development at the Media Design School in Auckland. Beginning in 2006, he developed and taught across all papers offered on Media Design School’s Diploma of Interactive Gaming, introducing students to fundamental techniques and technologies for video game programming. In addition, Steffan also developed and taught on game programming and production papers offered on the Graduate Diploma of Game Development. In 2012, as Acting Course Leader, Steffan was responsible for leading the development of the Bachelor of Software Engineering (Game Programming), preparing lesson plans and departmental resources for the New Zealand Qualifications Authority (NZQA) Degree Approval and Accreditation panel, along with recruiting, mentoring and managing new members of faculty.

Certificate in Science and Technology (CertScT):

Steffan’s current research interests are in the fields of computer graphics and game development.