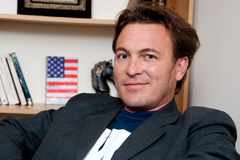 Paul’s research interests are in popular culture studies, transmedia and fan practices. He has published widely in the areas of comics, sci-fi, fantasy and related storyworlds and franchises. His most recent book project has been Planet Cosplay: Costume Play, Identity and Global Fandom (Intellect Books: UK, 2018). He has also spoken widely at conferences internationally, including the 2017 opening keynote at the European Popular Culture Association annual conference at London University of Arts, College of Fashion.

In 2006 he was awarded the inaugural Vice Chancellor’s Award for Excellence in Teaching for his approach to research led, student directed learning. He was one of three shortlisted for best lecturer (Applied Humanities) in 2007, and in 2010 he received the AUTSA/Awesome Best Post Graduate Supervisor at AUT award.

Paul’s current and past supervision of research projects range from creative literature to web-based media.