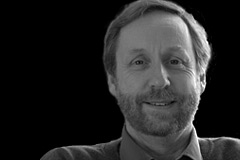 Peter has held a number of roles at AUT over a 30 year period. Since 2017 he has been the School of Art and Design’s Associate Head of School (Research and Innovation), and was previously head of the Communication Design department, a role he held for 15 years. Apart from his supervising roles, he primarily teaches design theory on the Communication Design major.

Peter teaches across the undergraduate and postgraduate degrees, focusing particularly on design history, theory and practice as well as calligraphy. He received AUT’s ‘distinguished teaching award’ in 2006.

Peter has twin research practices, one visual and one historical. He has degrees across several areas of history, with his research having developed from early interests in Ancient Egyptian art and Impressionism via the writing, design and use of letterforms to now reside principally in areas that relate to the design and usage of early twentieth century postcards. He has particularly focused on greetings postcards that were intended for use between emigrants and their families at ‘home.’ Peter has worked professionally as a calligrapher in Denmark and New Zealand, and his calligraphic work has been recognized internationally.