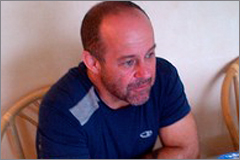 John Buttle gained his Ph.D. in Criminology from the Centre for Comparative Criminology and Criminal Justice in the School of Social Sciences at the University of Wales, Bangor in the United Kingdom. His thesis is entitled "The Shift from Defensive to Offensive Policing: CS spray and the Use of Force".

John has published in reputable academic journals, written chapters for books and he often attends international conferences. He has written reports for the New Zealand Police, the Ministry of Justice and the National Assembly for Wales.

Local politicians, the police and human rights organisations have sought his advice on matters of policy and criminal justice reform.

John is regularly interviewed by local and international media. He actively engages in public debates on the future of criminal justice in New Zealand.

My New Zealand focused research is providing a critical analysis on the the Independent Police Conduct Authority (IPCA) by examining how independent this organization is from the police. Furthermore, I am in the process of gaining insight into how abolitionist perspectives on prison may benefit New Zealand.

Along with colleagues I am currently writing about aspects of policing in Indonesia. Including police corruption, media representations of police corruption, the police complaints process, and how transnational police partnerships have effected Indonesian police reform with the provision of donations and advice.

My postgraduate students have conducted research into how the police utilise DNA evidence. Some have researched how media representations provoke fear of crime in the public imagination and how fear of crime can influence how people engage in the workplace. One student investigated public perceptions of vigilantism while another is conducting a comparative analysis of the New Zealand and Hungarian criminal justice systems.

I was nominated to represent the Faculty of Applied Humanities (now Faculty of Society and Culture) for the Emerging Researcher category in the 2008 round of the Vice Chancellor’s Research Awards.

I was nominated by students for the 2008 AUTSA Awesome Awards for the category of Best Lecturer in the Faculty of Applied Humanities.