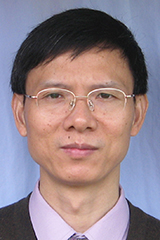 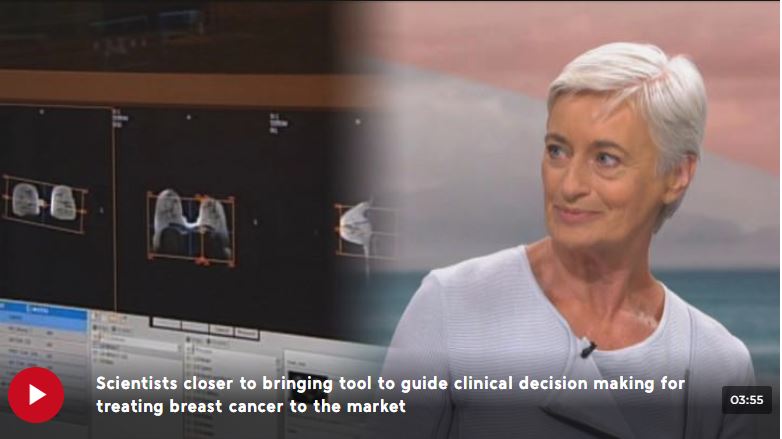 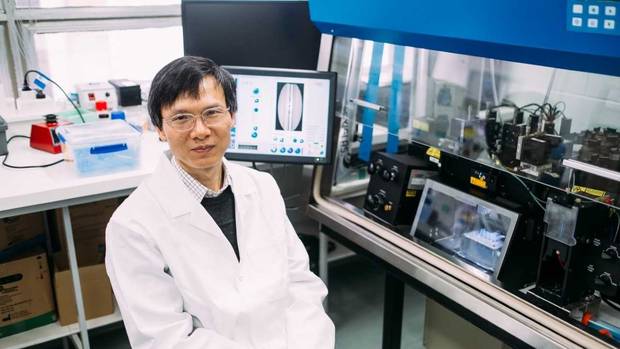 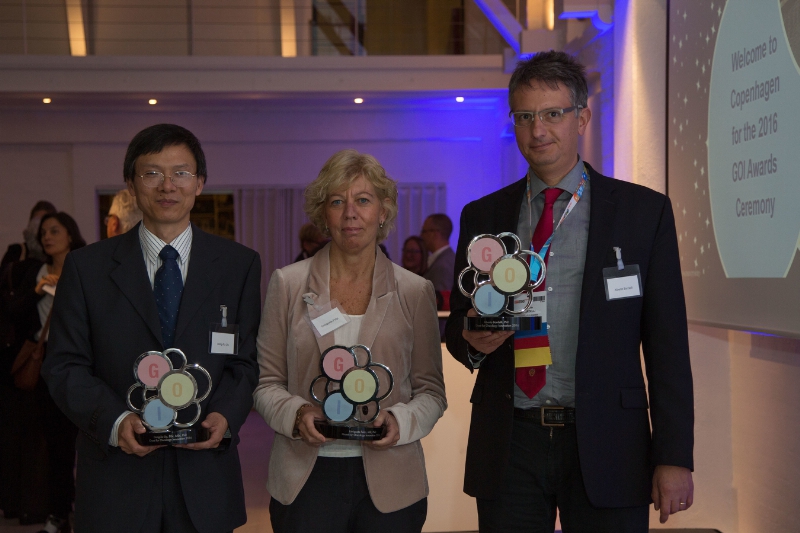 AUT University Associate Professor Dong-Xu Liu (left) was one of the only three 2016 GOI award winners.

In 1983 Dr Liu went to the China Agricultural University, one of the national top 10 key universities in China and graduated in 1987 with a BSc in plant genetics and breeding. After worked at the Mianyang Institute of Agricultural Sciences from 1987 to 1989, he studied at the Chinese Academy of Sciences: Chengdu Institute of Biology for three years and earned his MSc in genetics in 1992. He worked in the Medical Laboratory of Molecular Biology at then West China University of Medical Sciences, now part of the Sichuan University for two years, carrying out medical research on genetic diseases (beta-thalassemia) and multidrug resistance of tumours. From July 1994 to October 1995, he was a visiting scholar at the Royal Marsden Hospital: Institute of Cancer Research, London, United Kingdom, participating in a programme to identify genes differentially expressed between the normal and malignant breast tissues. He successfully identified five novel PI 3-kinases which were not found by other competitors in the area at that time. He later studied at the University of Westminster with the support of an Overseas Research Student Award from the British Government. He was awarded a three year PhD scholarship by the National University of Singapore in 1997 to read for a PhD in medicine, which was conferred in 2001. Dr Liu held a post-doctoral fellowship position at the Institute of Molecular and Cell Biology (IMCB), A*Star, Singapore for 4 years from 2000 to 2004 before he took a more senior position at the Liggins Institute, University of Auckland, where he spent more than 12 years doing breast cancer research. In August 2016 he joined in the Auckland University of Technology as an Associate Professor.

Dr Liu's laboratory currently focuses on the identification of diagnostic and prognostic biomarkers for breast cancer, and the development of therapeutic agents that target specific growth factors or molecules involved in cancer growth and progression. His work has attracted much attention in the area of anticancer drug development. He has been invited to give plenary talks at national and international conferences and present his work at many research institutes and universities. He has active collaboration with researchers in other universities and organizations around the world. Through collaboration with Prof. Ian Ellis and Dr Andrew Green, world well-known breast cancer pathologists at the Nottingham City Hospital, he has access to the Breast Cancer Now Tissue Bank of United Kingdom - the world’s largest breast cancer tissue bank with a collection of more than 2,000 breast cancer tissues, which facilitates the translation of pre-clinical laboratory advances into clinical practice. By analysing the expression of SHON protein (one of the oncoproteins he identified and named) in a cohort of 1,650 breast cancer tissue samples, he demonstrated that SHON was a potential biomarker for predicting patient response to anti-estrogen therapy. This finding itself was very exciting and had a very significant clinical significance because anti-estrogen therapy is the mainstay of treatments for three quarters of breast cancer patients whose tumour are ER positive, but up to 50% of these patients do not response due to drug resistance. SHON thus has the potential utility in selecting the right patients for such treatments, avoiding giving ineffective treatments to non-responders. This work was published in the prestigious oncology journal Cancer Research (DOI: http://dx.doi.org/10.1158/0008-5472.CAN-13-0982), which is the most highly cited cancer journal in the world and published by the American Association for Cancer Research (AACR). His work was highly regarded by both the editors and the reviewers, being commented as “an outstanding manuscript” and “the authors should be commended on producing this manuscript”. His lab is now working to understand how SHON drives the progression of breast cancer and to commercialise the SHON biomarker in anti-estrogen therapy.

In collaboration with Prof. Steve Chan at the Nottingham City Hospital, a mega analysis of more than 10,000 clinical breast cancer samples has identified that a gene, called SPAG5 (sperm associated antigen 5) and also known as astrin, is a novel chemotherapy biomarker and a potential therapeutic target: 1) amplification/gain of the SPAG5 locus at Ch17q11·2 was found in about 20% of all breast cancers; 2) the SPAG5-gene-copy number aberrations and its transcript and protein were associated with poor clinical outcome and adverse clinicopathological features, including TP53-mutation, PAM50-LumB, and PAM50-HER2; and 3) both high expression of SPAG5 mRNA transcript and protein are independent predictors for response to chemotherapy. These findings have been published in the Lancet Oncology journal (DOI: http://dx.doi.org/10.1016/S1470-2045(16)00174-1), together with a commentary report titled "SPAG5: the ultimate marker of proliferation in early breast cancer?" by François Bertucci, Patrice Viens, and Daniel Birnbaum (DOI: http://dx.doi.org/10.1016/S1470-2045(16)30092-4). The Lancet Oncology journal has an impact factor of 36.418 in 2017 and ranks third out of 202 oncology journals worldwide, is the leading clinical research journal in oncology, and is in the top 0.5% of all scientific journals, of any discipline, globally.

In the past 18 years he has taken part in quite a number of commercial projects involving the identification of therapeutic targets for cancer. As an inventor, he holds 14 international patents for potential therapeutic targets for cancer. He was one of the two founding scientists of Saratan Therapeutics Ltd, a biotech entity focused on the development of therapeutics to novel cancer target molecules. He has recently signed a contract with a Singapore biocompany to look at the possibility to use SHON as a blood biomarker for early diagnosis of breast cancer.

As a principal investigator and research scientist, Dr Liu has proven experience and expertise in most areas of molecular and cellular oncology and is familiar with many techniques. He has supervised/co-supervised 12 BSc (honours), 6 MSc and 16 PhD students. Although translational/commercial research limited his academic outputs, he has 55 publications in prestigious journals such as Cancer Research (2017 impact factor 9.130), Lancet Oncology (36.418), Oncogene (6.854), Cell Death & Differentiation (8.000), Molecular Cancer Research (4.597), Endocrinology (3.961), Molecular Cancer Therapeutics (5.365), Neoplasia (4.994), The Journal of Biological Chemistry (4.010), Breast Cancer Research (6.142), International Journal of  Cancer (7.360), Cancer Letter (6.491), and Scientific Reports-UK (4.122).

Dr Liu’s research has been funded by the New Zealand Government and charitable trusts including the Margaret Morley Medical Trust, the Maurice & Phyllis Paykel Trust, the Kelliher Charitable Trust. He has won several prestigious research grants from the New Zealand Breast Cancer Foundation, the Breast Cancer Cure Trust, the Auckland Medical Research Foundation, the Health Research Council (HRC) of New Zealand and the Lottery Health Research of New Zealand. In 2016, he won one of the three winners of the Merck KGaA Grant for Oncology Innovation (GOI), which was announced during the 2016 ESMO Congress in Copenhagen, Denmark (http://www.grantforoncologyinnovation.org). The three GOI winners were selected from 405 applications from 49 countries across the globe and Dr Liu was the only winner who is from outside of the European region since the establishment of the Grant.

AUT offers a variety of scholarships to both domestic and international students who want to do a postgraduate degree at AUT. More information on available scholarships can be found here: Scholarships and awards at AUT.

AUT-China Scholarship Council (CSC) scholarships: Top students from China are eligible to apply for these AUT-CSC scholarships. Students who receive a scholarship will be provided with a living allowance, return airfare to New Zealand, student visa fees, and the cost of health insurance for international students.

Prospective students are encouraged to discuss with Dr Liu about their research interests in breast cancer research before applying for any scholarships.