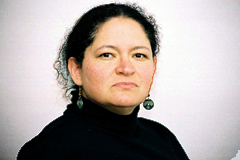 Cristina is originally from Chile, but grew up in Sweden, where her family went as political refugees in 1974. After a short spell in the US, she came with her Kiwi husband and first-born child to New Zealand in 1993 and taught in different capacities at the University of Auckland from 1994 to 1999, in Psychology and Latin American Studies. In 1994 she had her second child.

In 2000 the whole family spent the year in Chile, where Cristina did research and teaching at Universidad Diego Portales. Before coming to AUT she worked for a biotechnology company set up to commercialise a monitor for bedside detection of brain injury developed at the University of Auckland.

Cristina has an MSc in Psychology and a PhD in Clinical Psychology. The focus of her PhD was social anxiety, which led her to theories regarding the activation of social defence systems, the establishment of social hierarchies, and social identity development. Based on evolutionary cognitive psychology and social identity theory, she now combines qualitative and quantitative methodology to study development of ethnic and national identities; culture conflict in second-generation immigrants; activation of social defence systems and negotiation of social dominance in intercultural contexts.

She loves teaching, and in particular introducing people to that most thought provoking and rewarding of disciplines, Psychology: the scientific study of our mental lives, and of our relations to each other and to the environment.
Back to top
Opens an external site in a new window