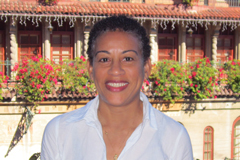 Camille Nakhid is from Trinidad and Tobago. She has a BSc in Chemistry from New York, and completed a Diploma in Secondary Teaching in Chemistry and Mathematics, a Masters in Education Administration (Hons), and a Doctor of Education (EdD) in New Zealand.

Camille's research interests include: the sociology of education; the social construction of identity; appropriate research methodologies for marginalised and minority groups; race and ethnicity; and Māori and Pasifika academic achievement.