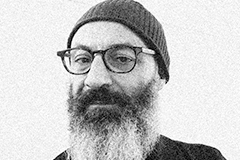 Andreas is a Senior Lecturer in the Fashion Design department. He previously held the position of Head of Department (Fashion & Textile Design) and has had extensive academic experience in New Zealand and in the UK, including the position of Director of Fashion Studies at The University of Derby.

He is also a practicing designer with a career initially starting with cult international fashion label Angel UK. He later established the menswear brand AJ Black selling to leading British and European retailers together with a UK flagship store which he opened as a platform for the label and also as a gallery showcasing mid-century design and curating/exhibiting work by emerging British artists. Andreas moved to New Zealand in 1998 where he set up the menswear brand – 'C.People' with Cambridge Clothing, opening retail stores in Australia with distribution in the USA & across Asia.

Other aspects of his work have included freelance menswear design for major global brands in Japan, Europe and Australasia, R&D for fabric and fibre manufacturers, and designing/styling for Magazines, TV, Film and Music Videos. He has also worked on joint projects with other designers and artists – including collaborative work with British conceptual artist John Newling, projects with New Zealand photographer John McDermott, on a series of short films with film maker, Gregg Wood and as Costume designer for a number of contemporary dance company’s, including a significant body of work for the New Zealand Dance Company.

He has had articles published on menswear design & authenticity, and was the co-Director of the major international Fashion & Textile design conference – Shapeshifting.

Fashion Design: Bachelor of Design, Honours and Master of Design.

His research focuses on the inter-relationship of Anarchism and ‘slow fashion’, together with an ongoing/underlying investigation that explores authentic contexts for academic fashion design ‘Practice’.
Back to top
Opens an external site in a new window